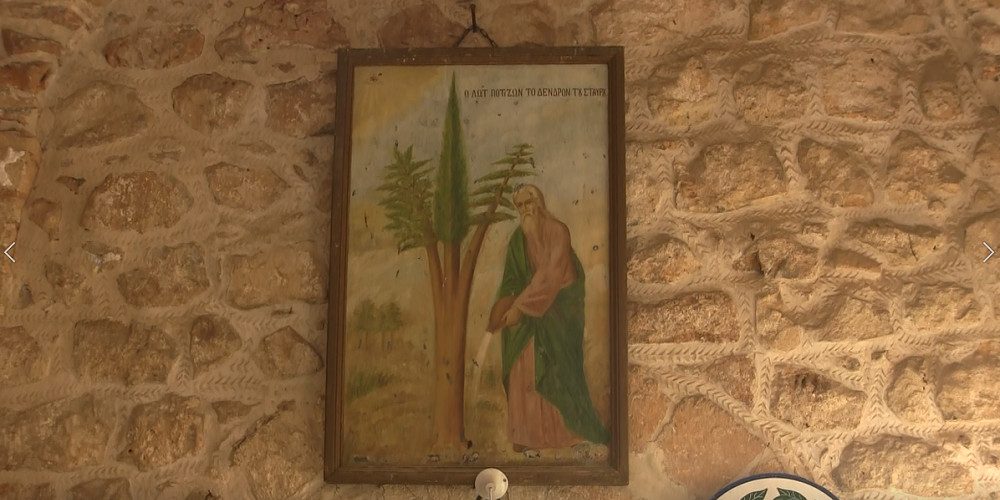 The Monastery of the Cross is an Eastern Orthodox monastery and it lies in the valley of the Cross, two kilometers west of the walls of Old Jerusalem and next to the Supreme Court of Israel.

The History of this place

The Holy Tree at the Monastery of the Cross

The name, the Monastery of the Cross, reflects the Eastern Orthodox believe that at this site grew the tree from which the holy Cross was made.

In this Video we are visiting the spote where this Holy Tree grew.

According to Eastern Orthodox tradition the story of the tree begins at the reign of Patriarch Abraham and it is connected to the appearance of the holy Trinity before him at Alonei Mamrei in the form of three angels. Before the Angels departed to destroy Sodom and Amora they left Abraham with three staffs.

According to the book of Genesis, following the destruction of Sodom, Lot, the nephew of Abraham, fled to a cave with his two daughters and then after getting him drunk, his daughters slept with him to acquire descendants.
After this terrible act Lot consulted with Abraham how to find redemption.
Abraham gave lot the staffs that the three Angles had left him
and instructed Lot to plant them on the outside of Jerusalem and to water the staffs with water from the Jordan river.
Then Abraham told Lot: “If the staffs blossomed it would signify that God has forgiven your sins. if not, then God has not forgiven”

According to tradition, the trees grew together in that one spot and later were used to construct the Temple in Jerusalem (“to beautify the place of my sanctuary”). Later during Herod’s reconstruction of the Temple, the wood was removed from the Temple and discarded, eventually being used to construct the Cross on which Jesus was Crucified (“and I will make the place of my feet glorious”).

The tradition is an allusion to Isaiah 60:13: “The glory of Lebanon shall come unto thee, the fir tree, the pine tree, and the box [cypress] together to beautify the place of my sanctuary, and I will make the place of my feet glorious.” The link between this verse and the Crucifixion lies in the words, “the place of my feet”, which is interpreted as referring to the suppendaneum (foot rest) on which Jesus’ feet were nailed (see Orthodox cross)

Other tradition claims that this is the burial spot of Adam’s head from which grew the tree that gave its wood to the holy cross.

The Fresco of Shota Rustaveli

Now let’s move on and visit the orthodox church at this monastery.
The original building that we are visiting today were built by the Georgians in the 7th century but due to heavy debt the monastery was sold in 1685 to the Greeks, which occupy this monastery today.
Here on one of the columns of the church is a fresco of the legendary Georgian poet, Shota Rustaveli, the preeminent poet of the Georgian Golden Age and one of the greatest contributors to Georgian literature.
Rustaveli who was also a minister at Queen Tamar’s court has retired to the Monastery of the Cross at advanced age and here he wrote the famous poem, “The Knight in the Panther’s Skin”.

That is all for this vidoe tour, and untill we meet again in our next video let’s all live the Jerusalem Experience!