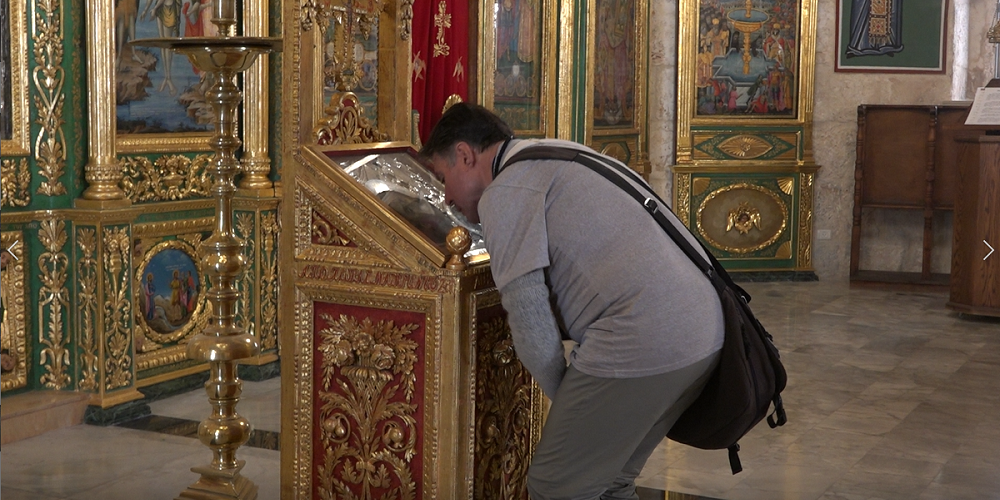 The Church of St John the Baptist Jerusalem is located in the Christian quarter in the old city of Jerusalem, not too far from the Church of the Holy Sepulchre, and can be easily identified from above by its silver dome.

A Map to The Church of St John the Baptist Jerusalem

The church itself is within a small courtyard and is next to a Greek Orthodox monastery. The entrance to the courtyard is from the Christian Market. Here above the entrance, there is a Relief of the head of John and also a sign with the word “Prodromos,” which means “the forerunner” – a reference to the words of John the Baptist, “I am not the Christ, but that I am sent before him” (John 3:28). The church of St John the Baptist Jerusalem is dedicated to the memory of the beheading of St. John the Baptist while the church of St John the baptist in Ein Karem marks the place where John the baptist was born.

According to the Synoptic Gospels, Herod Antipas, who was a sub-king of Galilee under the Roman Empire, had imprisoned John because he condemned Herod for divorcing his wife and marring Herodias, the wife of his brother.

On Herod’s birthday, Herodias’s daughter, Salome, danced before Herod and his guest, and when Herod in his drunkenness promised to give her anything she desired, on the advice of her mother, Salome asked for the head of St. John on a platter. “And she went forth, and said unto her mother, what shall I ask? And she said, the head of John the Baptist” (Mark 6:24). And so it was. Now let’s enter the church.

On the left, there is another stand with the complete skull of a poor 17-year-old boy named Peter, who was killed when he refused to convert from Christianity to Islam. Now let’s see what makes this church so unique from an archaeological point of view. The church we have just visited is built on top of a very old Byzantine church dating to the fifth century AD, and it is probably the oldest church in Jerusalem and the holy land. It is believed that this ancient church was built by Empress EVDOKIA, who established many institutions in the holy land and therefore was also called the second St. Helena.

The Old Byzantine Church of St John the Baptist

The church was destroyed in the seventh century by the Persians or the Arabs during their conquest of Jerusalem. During the Crusader period, at the same time that the Church of the Holy Sepulchre was restored, the ruined church was renovated and a new church was built over it. During the time of the Crusaders in the eleventh century, the church was used as the center of the Knights Hospitallers, which named their order the “Knights Hospitallers of St. John” and later became one the important military orders defending the holy land. During the Mameluk and Ottoman periods, the church returned to the hands of the Greek Orthodox church, which continues to operate the church and the monastery to this day. In 1839, the church was renovated to its current condition. We hope you have enjoyed our Video tour to the Church of St John the baptist Jerusalem, and until we meet again in our next video, let’s all live the Jerusalem Experience!