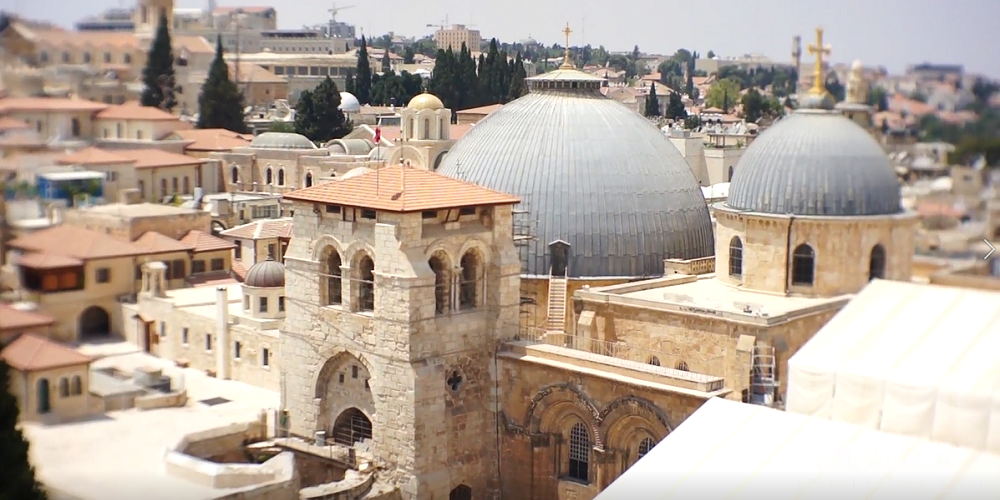 In today’s video tour we are visiting interesting sites within the Church of the Holy Sepulchre and which are NOT part of the last five stations in the final journey of Jesus along the Via Dolorosa. Some of these sites mark events that occurred at the time of the crucifixion and couple of days after, and some of these sites hold significant archaeological findings that are important for the identification of the site of the Church of the Holy Sepulchre as the actual site of the crucifixion and burial of Jesus.

But first, let’s start with some interesting findings right before we enter the church…

During the Crusader period here in Jerusalem, many important people, some of them even kings, asked to be buried right next to the tomb of Jesus inside the church of the holy sepulchre, and so it was.
When the Muslims took control of Jerusalem, they removed almost all of these tombs except for one. The tomb of Philip Daubeny (Philippe D’Aubigny) (1236), a tutor to young King Henry the third, was one of the people who signed, as a witness, the Magna Carta, and above all he was committed to the cause of the holy land. His tomb can be found right here at the entrance to the Church of the Holy Sepulchre, but today it is sheltered with a wooden cover.

Now let’s enter the church of the Holy Sepulcrhe…

The Stone of Anointing

When we enter the church of the holy sepulchre, we see in front of us the Stone of Anointing. This is where the body of Jesus was laid down in preparation for his burial after Jesus’s body was taken down off the cross.

“Then took they the body of Jesus, and wound it in linen clothes with the spices, as the manner of the Jews is to bury” (John 19:40).

From the stone of Anointing we shall turn left and arrive at….

The Chapel of the Three Marys.

This is the spot that, according to the gospels, marks the place where the three Marys stood and watched the Crucifixion and then the burial of Jesus.

According to John, the three Marys were :

” Now there stood by the cross of Jesus his mother, and his mother’s sister, Mary the wife of Cleopas, and Mary Magdalene” (John 19:23).

If we want to imagine what the three Marys had watched, we shall stand behind the chapel and look toward Golgotha.

From the chapel of the three Marys we shall enter the Rotunda, where the Tomb of Jesus is located, but in this video we shall go to the west side of the Rotunda to see the….

The Coptic Chapel is located, right at the back of the edicule. Inside this chapel there is a stone which is the back head of Jesus’s tomb – this is the actual rock part of Jesus’s tomb, while inside the edicule, the tomb is covered by marble stones in order to protect it.

Now let’s turn further back to the western extremity of the Rotunda to see….

The Tomb of Joseph of Arimathea at The Chapel of The Syrians .

Because the conflict between the Syrians and Armenians over the ownership of this Chapel, the condition of this place has been deteriorated to its current poor condition.

Each Sunday the Syriac Orthodox celebrates a mass in this room. At the opposite side to the entrance to the chapel there is the entrance to a passageway that leads to the tomb of Joseph of Arimathea. The discovery of this Jewish tomb confirms the usage of this area as a burial site during the time of Jesus and by that gives confirmation that the church of the holy sepulchre is the actual site of Jesus’s burial.

We first arrive at the Chapel of Mary Magdalene, which is dedicated to the encounter between Mary Magdalene and Jesus after his resurrection as it is described in the Gospel of John.

When Mary tried to touch her master, Jesus said:

Right next to this chapel is the Franciscan chapel of the Apparition of Jesus to his Mother as it is narrated in the apocryphal “Book of the Resurrection of Christ” by Bartholomew the Apostle.
The column here on the right is part of the Column of the Flagellation, to which Jesus was tied during his flagellation (see our video about station # 2 of the Via Dolorosa – Flagellation). To the left is a bronze status depicting Jesus meeting his mother Mary, and here on the shelf are 14 bronze statues that mark the Stations of the Cross.

Now let’s continue through the north aisle of the church moving east. This area is called:

The Arches of the Virgin

This area commemorates the visits of Mary to the tomb of her son. When we look around we can see the remains of the first Byzantine basilica, such as this back wall and these smaller columns with a rough exterior.

Heading east we shall visit four chapels that mark events along the final journey of Jesus. These chapels were built so pilgrims could commemorate scenes from the passion within the church of the holy sepulchre while they were not allowed to move freely in the streets of the city. The first one is:

In this place, according the Catholic, Jesus Jesus was held prior to his trial and for this I have a special video. According to the Orthodox, the prison of Christ is located near station 2 of the Via Dolorosa at the Praetorium Monastery.

The second one is:

The Chapel of St. Longinus

This chapel is dedicated to the Roman soldier who with his lance pierced Christ’s side, from which blood and water immediately flowed out. When he saw that, Longinus immediately accepted Jesus as the Son of God:

To the right is the third one:

The Chapel of the Division of the Holy Robes

This Chapel commemorates Jesus being stripped of his garments by the Roman soldiers.

Between this chapel and the fourth one are the stairs leading to the Chapel of St. Helena, for which I have a special video.

The fourth chapel is:

The Chapel of Derision

This Chapel commemorates the insults of the priests and the people toward Jesus at the beginning of his last journey toward his crucifixion. Here we can see a persevered fragment of the column on which, according to tradition, Christ sat when the crown of thorns was put on his head. There is a belief that if you put your ear at the altar, you can hear the sound of laughter.

We are now right next to the Rock of Golgotha, where Jesus was crucified, and here we can see part of the actual rock of Golgotha exposed.

Now let’s go upstairs to golgotha and have a closer look.

When we look at the Rock of Golgotha from the side, we can see the crack in the rock caused, according to earliest Christian tradition, by the earthquake that occurred at the moment of Jesus’s death. The crack was said to have allowed Christ’s blood to fall upon and thereby redeem Adam, who is thought to have been buried right below Golgotha, where today is the Chapel of Adam, right below us.

This is for today and until we meet in our next video let’s all live the Jerusalem Experience!