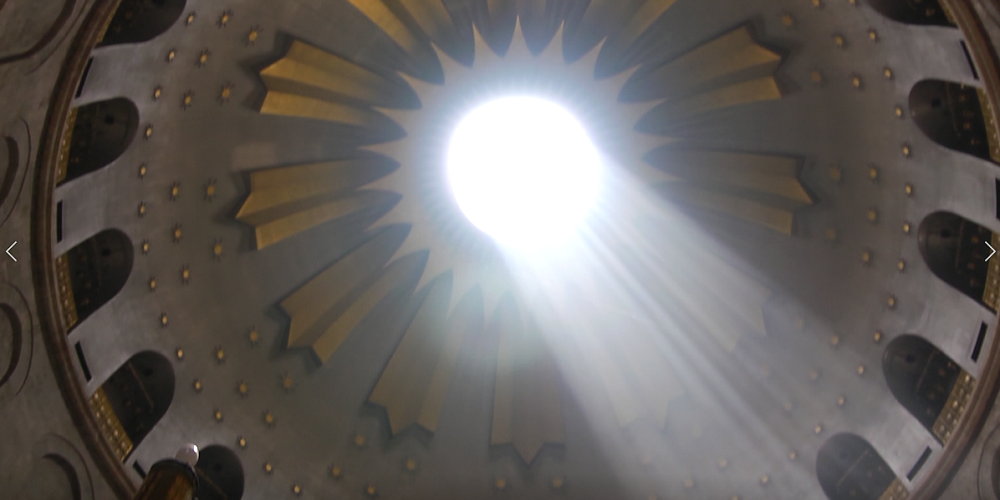 Church of the Holy Sepulchre

We are now in front the church of the Holy Sepulcher, where Jesus is believed to have been crucified at the end his walk along the via Dolorosa. The New Testament provides scants hints as to where Jesus’ earthly existence ended. Biblical sources suggest that the site – called Golgotha (Aramaic for skull) or Calvary – was then outside of Jerusalem’s Old City Walls, right next to a garden.

The site of the church was declared as the place where Jesus was crucified almost 300 years after. The year was 325 AD. The Roman emperor, Constantine, adopted Christianity as a legal state religion and sent his mother Helena to scout Jerusalem for sites relating to Jesus’ life. Legend has it that when Helena reached Jerusalem, she was told that there was only one old Jew who remembered the exact location of the Golgotha and he directed her to a pagan temple. A brief excavation revealed an empty cave tomb and a cistern containing the remains of three crosses (the Romans crucified Jesus along with 2 thieves). Helena, who believed that the Romans built their temples over sites deemed holy to other religions declared that this is the Golgotha site where Jesus was crucified and since then, the site changed hands many time.

Since this is the holiest site in the Christian world, each stream in Christianity claims to be responsible for this holy site. Many churches put pressure on the Ottoman Empire to gain more control over the church.

In 1862 the Ottoman, declared that the status of the church would revert to that of 1767. We do not know why particular this year but at this year the Greeks managed to take control of extensive areas within the church. This status quo has remained unchanged to this day. An illustration of this sensitive situation is the small ladder placed under the window over there. In the past, it is believed that this ladder used to bring food to the Armenian monks who were locked inside by the Turks. Now this ladder is still there since 1767.

Today, the care over the church is shared by no less than six denominations. The primary custodians are the Greek Orthodox, Armenian Apostolic and Roman Catholic Church, with lesser duties shared by Coptic, Ethiopian and Syriac Orthodox churches. The whole church is carefully parceled into sections, some being commonly shared while others belonging strictly to a particular sect.

The Church of the Holy Sepulchre is the holiest site in Christianity – more so than the Basilica of St. Peter in Rome or the Church of the Nativity in Bethlehem. However, it is not particularly beautiful or impressive – on the contrary. It has been marked by two thousand years of earthquakes and fires, deliberate destruction and natural wear and tear. To my opinion, this décor is battered suited to immortalizing the Passion of Jesus.

In my next video, we will visit the last 5 station of the Cross inside the church of the Holy Sepulcher.

I welcome your comments and recommendation, it is essential for me to know what my viewers are interesting in and how I can improve my blog.