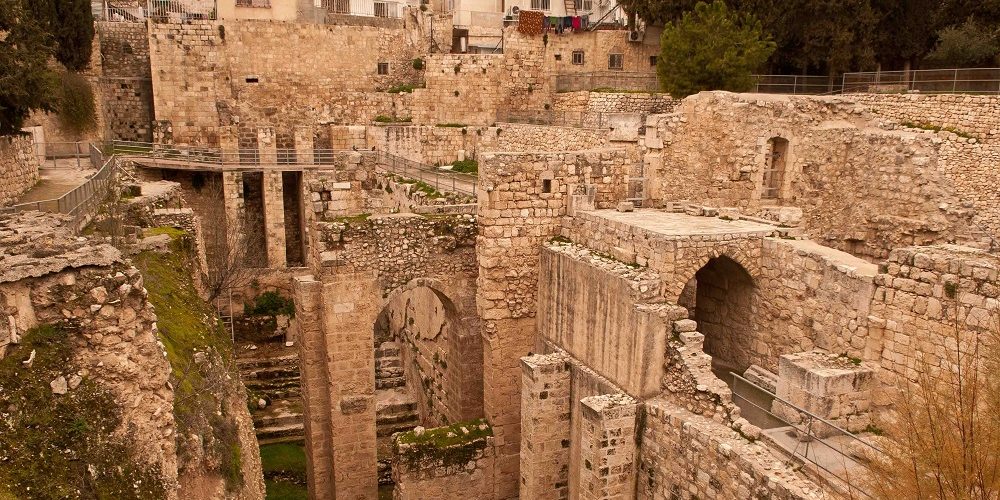 The Pool of Bethesda is located near the Church of St. Anne not too far away from the Lion’s gate right near the beginning of the Via Dolorosa at the Old City of Jerusalem.

Since Jerusalem is located on a mountain and because of the scarcity of rain in this region, people used to collect spring and floodwater in big cisterns and pools similar to the pools and cistern that we have here at the Pool of Bethesda. During the second Temple period, this pool and the surrounding area were used to heal and treat the disabled and this is why this place is called “Bethesda” which means “House of Mercy” in Aramaic.

Now you’re probably asking what any of this has to do with Jesus.

So this is where Jesus performed one of his miracles of faith. Legend has it that once a day, an angel would grace this pool and stir up the water. The first ailing person to get into the water when it began to stir would be healed immediately. As a result, many disabled people could be seen lying next to the pool waiting for the angel to come and stir up the water. According to the Gospel of St. John 5:2-9, Jesus was walking in the pools’ vicinity and saw an ailing person lying next to the pool who had been an invalid for 38 years. When Jesus asked him if he wished to get well, the man told him that since he is so weak, every time the water is stirred, someone always beats him to the pool. Then Jesus said to him “Get Up! Pickup your pallet and walk” and that’s exactly what happened. The man was cured at once.

Now here below is the southern pool of Bethesda, at the end of the winter where you can see the pool with water.

If we look around, aside from the pool, there are the remains of several archaeological finding.

Here right next to the pool is the remaining of a Byzantine Basilica for the 5h century.

And here is a Roman pagan temple from the 2nd century for Asclepius, the Greek God of healing. And over there is the remaining of a Crusader Chapel from the 12th century.

Getting back to the present, in the middle of New York’s Central Park, there is a fountain with an angel’s status: the Angel of the Waters Fountain at Bethesda Terrace.

That is for today and until we meet in my next video, Let’s All Live the Jerusalem Experience!!!