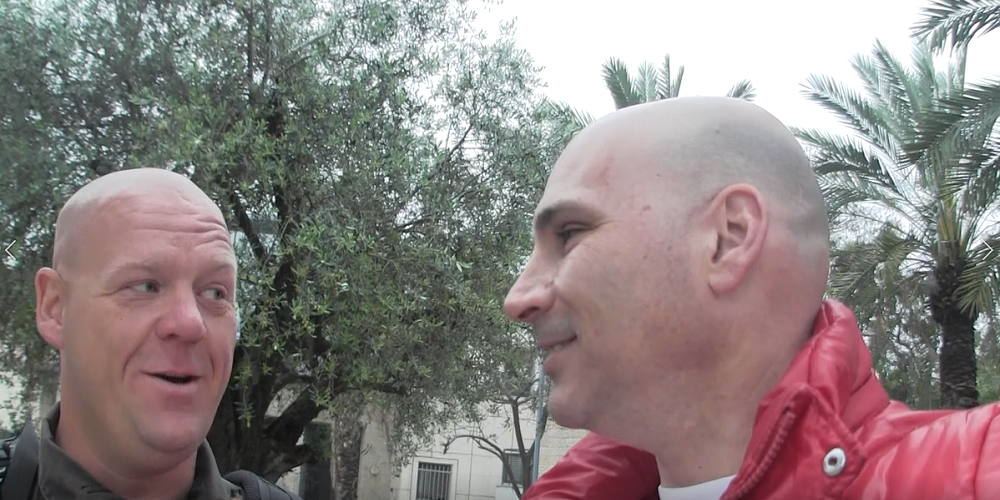 Hello everyone. Today we are meeting with Jorgen Nilsson, an engineer who leaves in Sweden and who is a member of the Order of Saint Lazarus of Jerusalem. Last November (2012) Jorgen has started a Pilgrimage for Peace Toward Jerusalem from his home country, Sweden, all the way to the holy land while his final destination is Jerusalem.  For the last 5 months, Jorgen has been walking over 5000 kilometer (3100 miles), passing through Denmark, Germany, France, Italy and Greece and on a cargo boat to Haifa. Along this journey Jorgen met wonderful people, from different cultures, as he was using Couch Surfing and hostels for sleeping accommodation

Jorgen’s primary goal for his Journey is to get media attention for Peace and against Xenophobia (fear of strangers) so people could live without fear. Jorgen direct his pilgrimage toward Jerusalem sine as a holy city, Jerusalem has always been a focal point for both conflicts and peace. Jerusalem is also a symbol for the efforts needed to obtain a more peaceful world.

This morning we are joining Jorgen to the final part of his long pilgrimage to Jerusalem. This part starts at the village of Abu Ghosh which is located west-north to Jerusalem, and ends at the Jaffa Gate in the walls of the old city of Jerusalem. For thousands of years,  Pilgrims from all over the world entered the Old City of Jerusalem through the same Jaffa Gate after arriving the holy land at the old port of the city Jaffa.

Along his journey, Jorgen has been walking all by himself, but today he will be joined by two other people: His partner Mrs. Rebecca Agronius and Count Philippe Piccapietra, the Grand Chancellor of the Order of Saint Lazarus of Jerusalem, an organization that was founded in Jerusalem back in 1098 and since then has been providing humanitarian aids all around the world. Last year the order has returned his magisterial seat (headquarter) back to Jerusalem after 700 years in exile in France, and today it is located at the Jaffa gate – the final point at Jorgen’s pilgrimage to Jerusalem. Since its return to the Holy Land, the Order of Saint Lazarus of Jerusalem has begun to provide mobility scooters and small electric vehicles to help disabled people around the Old City of Jerusalem, making their spiritual home more accessible to pilgrims and citizens who have reduced mobility. Count Philippe Piccapietra recently donated 4 four-seater green hybrid buggies to the City of Jerusalem, as part of a pilot project to offer pilgrims with disabilities a “gate-to-gate” service within the Old City. To highlight this project, Count Philippe is riding one of these green hybrid buggies all the way from Abu Ghosh to Jaffa gate along Jorgen Nilsson – now also disable pilgrims can go on a pilgrimage to Jerusalem.

As we arrived to Jaffa Gate, Jorgen was accepted by Mrs. Naomi Tsur, the Deputy Mayor of Jerusalem & Green Pilgrimage Ambassador, who gave Jorgen a book (Novel) named Jerusalem by Selma Lagerlof and also granted Jorgen with a pin of the Lion of Jerusalem.

The day after finishing his Pilgrimage to Jerusalem (April 22nd, 2013)  Jorgen is invited to discuss his spiritual journey to the Holy Land in a round table session entitled “Positive Footprints” at the First International Jerusalem Symposium on Green and Accessible Pilgrimage that is being held in Jerusalem, at the YMCA, and is organized by the Green Pilgrim Jerusalem as part of the Green Pilgrimage Network – An organization with a mission to welcome millions of pilgrims and eco-friendly travelers to the City of Jerusalem every single year.

Thant’s it for today and until we meet in my next video, Let’s All Live the Jerusalem Experience!!!

P.S. – Jorgen is staying at the Ambraham Hostel Jerusalem, a preferred hostel by pilgrims to Jerusalem. Last year I have met there with Mr. Gerhard Bruckner from Munich how made a pilgrimage to Jerusalem from Germany over a year – Walking to Jerusalem.