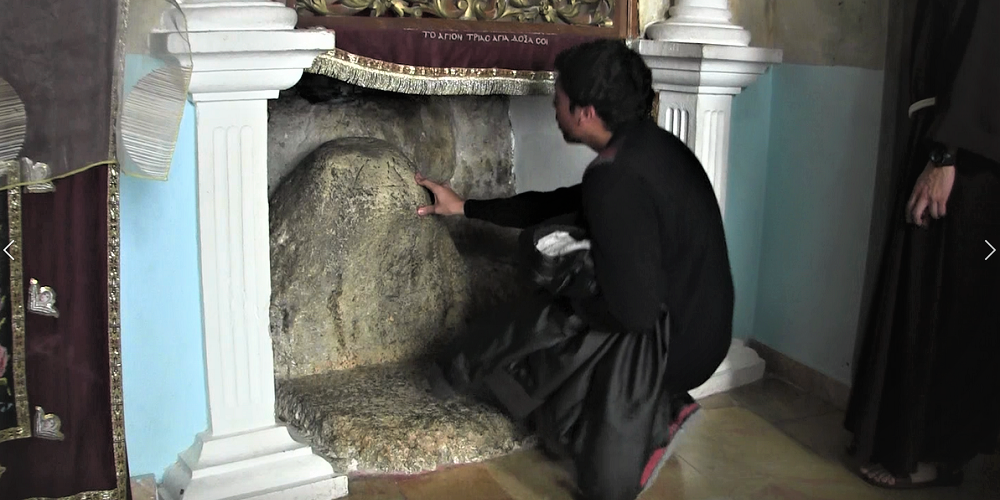 “And Jesus being full of the Holy Ghost returned from Jordan, and was led by the Spirit into the wilderness,Being forty days tempted of the devil. And in those days he did eat nothing: and when they were ended, he afterward hungered.” Luke 4:1-2

The Mount of Temptation is said to be the hill in the Judea Desert where according to Luke (4:1-13) and Matthew (4: 1-11)) Jesus was tempted by the devil.

The biblical Mount of Temptation is generally identified with Mount Quarantania, a mountain approximately 3 km (1.9 mi) north-west of the town of Jericho. The name Quarantania is a mispronunciation of the Latin word Quarentena, meaning 40, the number of days in Jesus’ fast. This period of fasting became the model for the practice of Lent in Christian churches which end before Easter Sunday .

Atop the mount of Temptation is the Greek Orthodox Monastery of the Temptation or “Qarantal” which we are visiting today.

As you can see in our video, some climbing to the monastery by walking and some using a cable.

The Temptation of Jesus

According to the Gospels of Matthew (4:1-11) and Luke (4:1-13) Jesus was let by the holy spirit into the desert right after he was baptized by John in the Jordan River. While Jesus fasted, the devil tempted him three times to prove his divinity by demonstrating his supernatural powers.

Each time, Jesus rejected the tempter with a quotation from the Book of Deuteronomy, So the devil left and angels brought food to Jesus, who was famished.

According to tradition from the 12th century, two of the devil’s temptations were on the Mount of Temptation.

While Jesus was fasting in its grotto for 40 days, the devil asked Jesus to turn a stone into bread as a proof of being the son of God but Jesus answered:

“It is written: ‘One does not live by bread alone, but by every word that proceeds from the mouth of God.'” Luke 4:4

In our video we are visiting the Grotto where all this happened.

THE 2nd Temptation – At Top of the Mount of Temptation

“Again, the devil taketh him up into an exceeding high mountain, and sheweth him all the kingdoms of the world, and the glory of them; And saith unto him, All these things will I give thee, if thou wilt fall down and worship me” Matthew 4:8-9

At the South summit of the Monastery inside a chapel at a higher point on the mountain there is a stone on which according to the gospel of Matthew, Jesus sat as the Satan offered him all the kingdoms of the world in return for worshiping the devil. We shall also see the view of the city of Jericho – the same view that Jesus saw when he was being tempted by the Devil.

In our video we are visiting the Chapel and the same stone on which Jesus sat while he was tempted by the Devil. Jesus answer to the devil was: “for it is written, Thou shalt worship the Lord thy God, and him only shalt thou serve.” Matthew 4:10.

The present Monastery of the Temptation, reconstructed at the end of the 19th century, seems to grow out of the mountain. The northern half is cut into the almost sheer cliff, while the southern half is cantilevered into space.

I hope you enjoyed my video of the Mount of Temptation, and until we meet in my next video let’s all live the Jerusalem Experience!