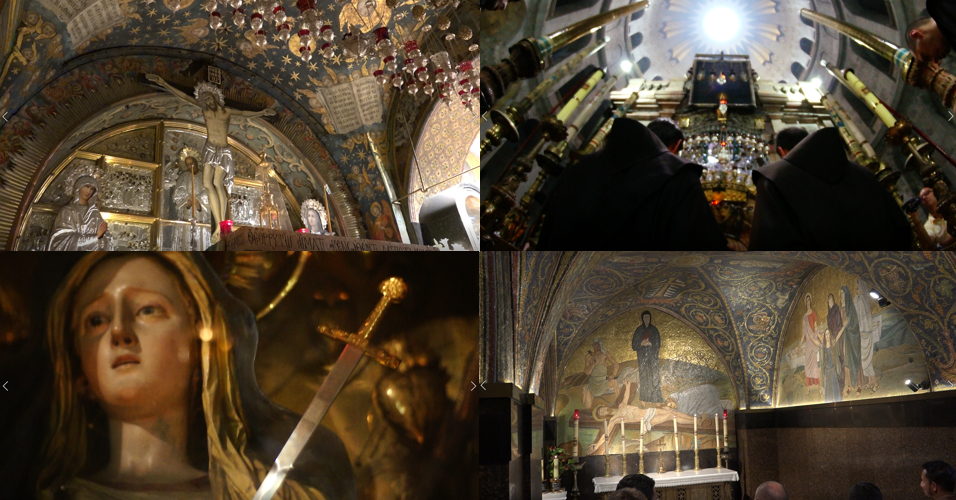 Church of the Holy Sepulchre, Via Dolorosa

We are at the end of the Via Dolorosa and we are about to visit the last 5 stations ( Via Dolorosa Station 10, Station 11, Station 12, Station 13, Station 14) of the Passion of Jesus and all of them are located inside the Church of the Holy Sepulcher. To my opinion, that it is the most exciting part of the Via Dolorosa, and we are going to see people from all over the world stopping at each station, touching the stones, praying, making wishes for health and forgiveness, shedding tears and simply overwhelmed with emotion. I will do my best to infuse you with this excitement.

Now let’s go over there to look at Via Dolorosa 10 Station (Station 10) where the Roman soldiers stripped Jesus of his garments prior to the crucifixion and it is located in this small chapel, at the end of these stairs.

We are now at Via Dolorosa Station 11, where Jesus was nailed to the Cross while it still lay on the ground. According to the New Testament, it is at this point that Jesus uttered the sentence “Father, forgive them, for they know not what they do”. The mosaic above the altar depicts the Roman soldier engaged in the dreadful task while Marry, Jesus’ mother, is shown watching the scene with startling serenity.

The Franciscan chapel we are standing in was restored in 1937 by Italian architect Antonio Barluzzi, whose has designed churches all over Jerusalem.

The wall hereon the rightis decorated with a depiction of the Sacrifice of Isaac, showing Abraham about to slay his son, as a test of his faith. Here the artist has implied a link between the Old and the New Testaments, suggesting that God himself is binding his son Jesus whose pose and loincloth are similar to those of Isaac.

Now let’s proceed to Via Dolorosa station 12 where Jesus dies on the Cross. This area is administered by the Greek Orthodox Church. Their altar is positioned exactly over the spot where the cross – with Jesus on it – stood, hence it also symbolizes the site of his death. As you can see, many pilgrims go down on their hands and knees to reach through the opening to touch the hole in the rock where the cross was affixed. Behind the Altar there are life-size icons depicting Jesus on the Cross, flanked by the Virgin Mary and John the beloved.

We can also see the Rock of Golgotha from either side of the altar. When we look on the right side we can see that it’s cracked.

Here in between the two chapels, there is a small altar featuring a wooden case with a glass window. Inside the case there is a painted wooden bust of “Our Lady of Sorrows”.

This wooden statue, donated by the Queen of Portugal in 1778, shows Mary with a sword stabbing her in the heart, in reference to the New Testament verse relating Simeon’s prophecy to Mary: “Yea, a sword shall pierce through thy own soul also, that the thoughts of many hearts may be revealed” (Luke II:35).

The altar and statue marking the Via Dolorosa Station 13 stand at the site where the body of Christ was placed into his mother’s arms after he was taken down from the cross. Before Jesus was taken down from the cross, a Roman soldier stabbed him in the ribs with a spear to make sure he was dead. According to the New Testament, blood and water rushed from the opening. According to popular folklore, the blood that flowed out of the lifeless body was collected in a goblet from which Jesus drank wine during the Last Supper, when he proclaimed that the wine was his blood. This is the famous Holy Grail believed to endow its holders with superhuman powers and eternal life.

Now, remember that when we looked to the right of the Rock of Golgotha where the cross stood, we saw a crack in the rock? According to the New Testament, when Jesus gave up his spirit, “The earth shook and the rocks split” (Matt.XXVII:51). Here at Adam’s Chapel, which is right beneath the spot where the cross was raised, we can see a cracked slab of rock. Many believe that Adam was buried at the base of the Rock of Golgotha. When the rock split, a drop of blood from Christ’s wounds seeped through the crack and touched Adam’s skull. Thus Jesus brought redemption to the first sinner.

We are now standing next to the stone of the Unction [an-c-tion – act of ano-in-ting] which is right at the entrance of the Church of the Holy Sepulchre. Joseph of Arimathea with the help of a friend released Jesus from the Cross and placed his body into Mary’s arms. Then they took the body from the Rock of Golgotha and brought it to the foot of the rock to prepare it for Jewish burial: “Then they took the body of Jesus, and bound it in linen cloths with the spices, as is the burial custom of the Jews “(John XIX:40).

The Marble slab that we see today was brought here in 1810 in order to protect the original stone underneath. Popularly called the “Stone of the Anointing”, it is believed to mark the place where Jesus’ body was anointed with oils and spices. For centuries, Christian pilgrims have been customarily prostrating themselves before the Stone of Anointing and placing belongings and jewelry on it for luck.

Behind the Stone of the Anointing, there is a splendid wall mosaic that was prepared for the Millennium celebration and Pope John Paul II’s visit to the church. It illustrates the events following the crucifixion.

Now let’s proceed to Via Dolorosa Station 14 as the final station of the Via Dolorosa in Jesus’ final journey: The Sepulchre of Christ.

Jesus came from Nazareth, so he did not have a family burial site in Jerusalem. Joseph of Arimathea, the one who removed Jesus from the Cross, donated his own tomb to bury Jesus. And here we are in front of an olive wood structure covering the Sepulchre of Christ. This shelter is known as the Aedicule [A(e)-di-cul] (Latin for “small shrine”). Within this structure, there are two sepulchral chambers. The first is called the Chapel of the Angel. According to the New Testament, Joseph of Arimathea sealed the entrance to the second chamber  with a round stone. Three days later, an Angel removed the stone at which point Mary, the mother of Jesus and Mary Magdalene noticed that the grave was empty. Then the Angel told them that Jesus had been resurrected and instructed them to tell his disciples the news.

In the middle of the first chamber, there is a glass-enclosed case containing part of the large stone that blocked the opening to the cave tomb. The second chamber is the Chapel of the Holy Sepulchre where the empty Tomb is located.

Here outside the two chambers, we can see people light candles and then blow them out so that they can take them home as souvenirs of the Holy Sepulchre and not just mere candles bought at a souvenir shop. By the way, the candles that people light here are made up of 33 candles in memory of Jesus’ age was when he was crucified.

If we look above the Sepulchre of Christ, we can see the dome of the church of the holy sepulchre. The center of the dome features 12 golden stripes representing the tongues of fire of the Holy spirit which descended upon the 12 Apostles, thereby enabling them to master different languages and spread the message of Christianity. The dome was originally open to the heavens, symbolizing the direct link to God at the site where Jesus was resurrected. Today there is a clear glass window there.

I hope you enjoyed this video about the last 5 stations of the Via Doloros.

That’s it for now and until we meet again in my next video, Let’s all live the Jerusalem Experience !!!!

Church of the Holy Sepulchre The Via Dolorosa Jerusalem Videos