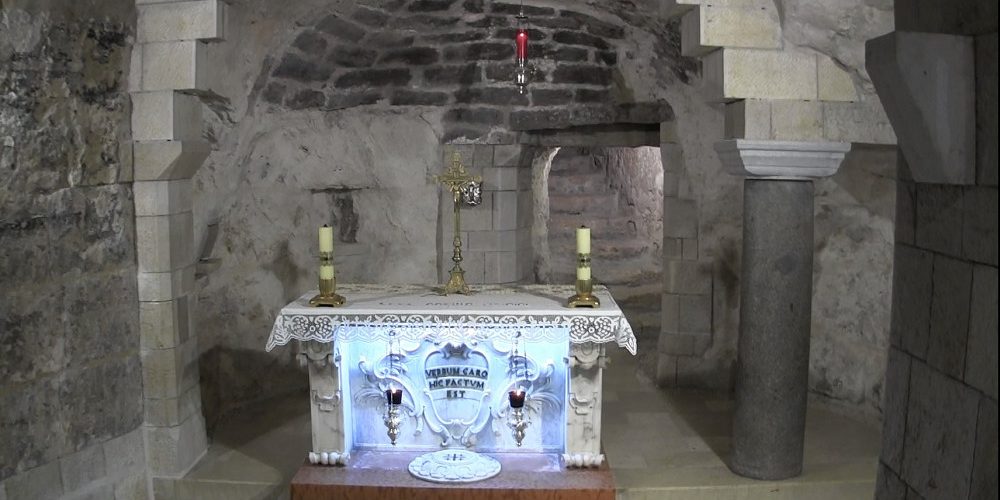 Church of the Annunciation and Church of Saint Joseph

The church that we are visiting today was built in 1967 and according to Christian tradition it marks the house of Mary where the angel Gabriel appeared and announced her that she is about to give birth to the Sun of God, Jesus.

Right next to the entrance to the church Mary is welcome us to her home. Watch how her hands are black from the hand of so many people who have touched them.

Before we enter the church let’s have a look at the gates to the Church.

The first one depicts scenes from the Old testament such as “the Sacrifice of Isaac”, Noah’s Ark and Adam and Eve.

The Second gate depicts scenes from the New Testaments such as the Crucifixion, the flight into Egypt and the Baptism of Jesus.

The current church is a two-story building and we are now at the lower level.

Notice the floor as it looks as we are going down the stairs.

At his level is the Grotto of the Annunciation where many Christians believe it is the remains of the original childhood home of Mary.

Notice the inscription on the altar “Here the word made flesh” – this is the only place in the world where these words are written.
Behind the altar are the stairs from the 4th century byzantine church that led to the grotto.

Opposite to the grotto is an altar for ceremonies and above it is an opening in the ceiling leading to the upper church.

As you can see, the grotto is flanked by remnants of earlier churches on the site.

Four earlier churches were built in the same location and archeological excavations in the site also revealed early Roman settlements.

The first church was right next to the grotto that we have just visited – and we saw the stairs from that church.

The second one was constructed by Helena in 470 AD and was destroyed during the Arab invasion.

Then a new magnificent church was built by Crusaders and that church stayed until 1187 when destroyed by Mameluke. It was rebuilt again in 1877 but then demolished again in 1955 and rebuild to its final design in 1969.

We are now at the upper church which is one of the largest and most impressive churches in the middle east.

Here is the opening, now in the floor, overlooking the grotto of the annunciation.

This church holds a gallery with mosaics representing some of the most important Maria devotions in different countries such as China, Peru, United State, Brazil, Spain, Japan and Mexico.

As we excite the upper church we see the baptistery and atrium area of the church
and beneath it are archaeological excavations from different periods going back to the time of earlier Christians in the holy land.

St. Joseph Church – The House of the Holy Family

From here we shall continue to the St. Joseph Church named after Joseph the Foster father of Jesus.
Here is St. Joseph welcome us to his home. Since Joseph was a carpenter, please notice Joseph’s hands and body.

The church of St. Joseph marks the place where, according to tradition, used to be the carpentry workshop of Joseph.

Some of the tradition also claim this was Joseph’s house where the holy family lived after returning back from Egypt.

This church is also comprised of 2 levels.

The upper level, where we are now, serves as a church and holds pictures and status of the holy family. This church also, was built over the ruins of a Byzantine church.

In the lower level where we are heading now there is a crypt with an ancient water pit, mosaics, caves and barns from ancient Nazareth that survived since the 1st and 2nd centuries B.C.

Here is an ancient baptismal pool with Mosaic

over there is an old cistern and here are stairs leading to a cave where according to tradition was used as Joseph’s workshop.

Here outside the church is statues of the holy family.

Before we leave the compound of the church we can walk around and watch look at more mosaics representing some of the most important Maria devotions as we saw at the upper church.

That is for today, and until we meet in our next video Let’s All live the Jerusalem Experience!