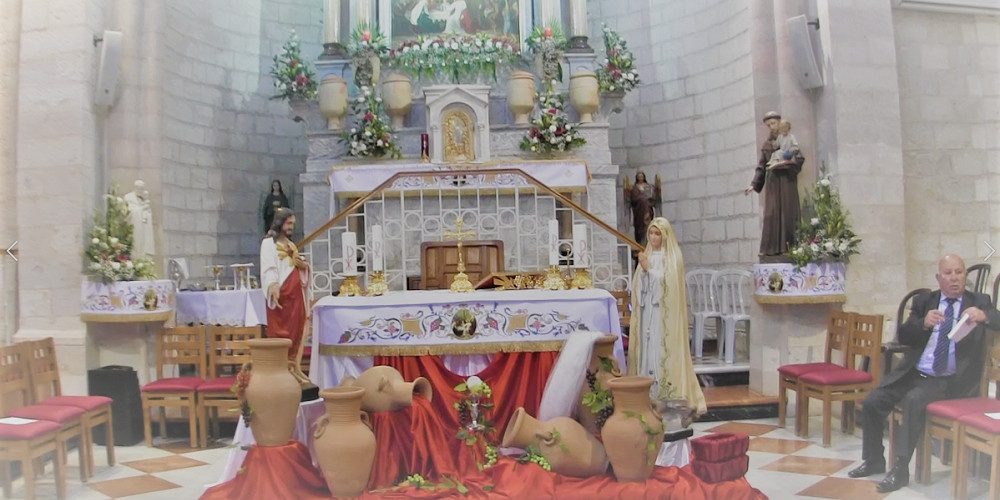 The Village of Cana

The ancient village of Cana which is mentioned in the Gospel of John 2:1-11 as the wedding at Cana, is known today as Kfar Kanna and it is located in the Galilee,  about 5.3 miles north east to the city of Nazareth. The place of the Wedding is marked today by the Franciscan Catholic Wedding Church.

The miracle at the wedding at Cana, is considered as Jesus first public miracle, and it is described at the Gospel of John 2:1-11. Opposite to the entrance to the wedding church are the first verses written along the wall:

“On the third day there was a marriage at Cana in Galilee, and the mother of Jesus was there. Jesus also was invited to the marriage with his disciples.  And when they ran out of wine, the mother of Jesus said to Him, “They have no wine.” And Jesus said to her, “Woman, what does this have to do with me? My hour has not yet come.” His mother said to the servants, “Do whatever he tells you.” (John 2:2-5)

The Feast of the Wedding at Cana

Each year on January 18 the Franciscan celebrate the first miracle by Jesus with a special solemn mass here at the Wedding church at Cana. Right at the end of the Solemn mass a big feast is taking place in the garden of the church with many guest from around the area as you can see at the end of our video.

This church is also dedicated to St. Bartholomew the Apostle, which was Jesus’ newest disciple at the time of the wedding and is identified by some scholars as Nathaniel from Cana of Galilee.

Behind the altar at the back end of the church is a picture depicting the wedding and in front of the altar there are status of Jesus and Mary and off course jars symbolizing the miracle of Jesus by turning water into wine.  This motive of ancient jars is spread throughout the church.

The church that we see today was built on the remaining of an old byzantine church. When we walk from the entrance toward the altar we can see a window in the flour and below it there is a fragment of a Byzantine mosaic dating from the 5th or 6th century which preserve the name of the donor in Aramaic – Pious Joseph son of Tanhum.

“In memory of the pious Joseph, son of Tanhum, son of Bota and of his children who made this table, may it be for them a blessing, Amen”

Right next to the entrance of the church is an entrance to a museum which holds remaining of the first byzantine church and old jars founded in the area. One jar is said to be one of the six jars used for the miracle.

when we pass the entrance we get to the area were the old byzantine church used to stand and today serve as the foundation to the current church but you can still find some remaining of that byzantine church.

We shall pass to the next room to find where, according to tradition, the actual wedding took place. In the center there is a replica of an ancient water jar from the period of the wedding. If you want you can leave note with a prayer to good.

As we exit the church we shall get to a beautiful garden with motives from the weeding.

Church of the Annunciation and Church of Saint Joseph