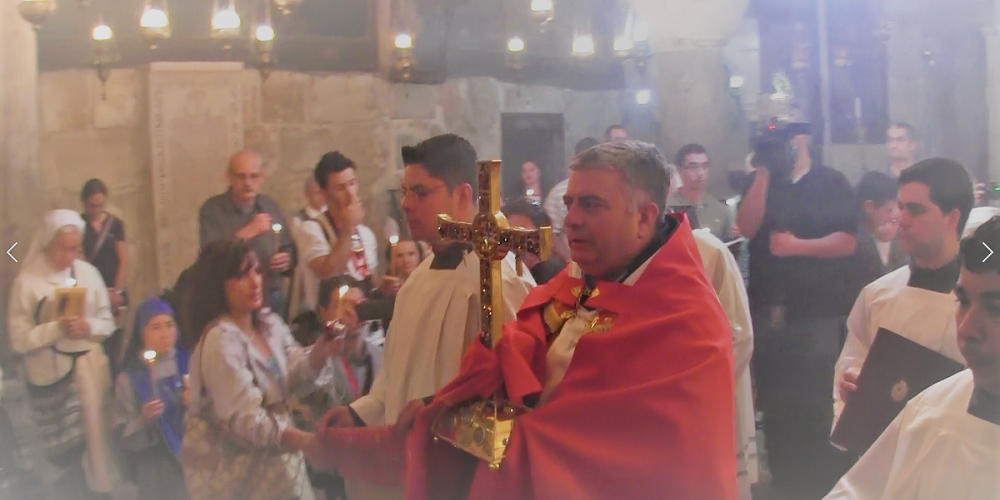 In the Christian liturgical calendar, there are several different Feasts of the holy Cross, all of which commemorate the cross used in the crucifixion of Jesus. While Good Friday is dedicated to the Passion of Christ and the Crucifixion, these days celebrate the cross itself, as the instrument of salvation.

Today we are watching the Invention of the Holy Cross celebration, Feast of the Cross, by the Catholic and the Franciscan, here at the Church of the Holy Sepulchre. The meaning “Invention” is not “inventing” something. It is about “Finding” the thru Cross on which Jesus was crucified. According to many Christians belief, Jesus’ Cross was found in year 326 AD by Empress Helena, mother of Constantine the Great, the Roman Emperor who has set Christianity as the official religion of the Roman Empire.

According to Rufinus of Aquileia, a biblical scholar and a historian, who lived in the East from 373 to 398, Jesus’ Cross was found in an ancient Roman cistern close to Calvary. This cistern is today part of the complex of the Church of the Holy Sepulchre here in Jerusalem.

The cistern, in which the Cross was found, is located underneath the western end of the Crusader Basilica. Today, the cistern serves as a  cave Chapel, which belongs to the Franciscan, dedicated to the finding of the holy Cross. This Chapel is right below the Church of St. Helena, which belongs to the Armenian Orthodox Church. Every year on 7 May, the Franciscans celebrate here the feast of the Finding of the Cross. The feast is very ancient in the Jerusalem liturgical calendar. It is celebrated by a solemn procession around the Basilica with the singing of Vespers on the preceding day. During the night the Franciscans celebrate a solemn Vigil and on the day of the feast the Fr. Custos of the Holy Land presides over a Pontifical Mass in the crypt, followed by the procession with the relic of the True Cross.

The cave chapel of the Finding, or Invention, of the Cross was filled with rubble by Constantine’s architects, who built in this area the Martyrion, which was a large Basilica for liturgical celebrations, on the western side of the open courtyard separating it from the Anástasis Dome where the Edicule of the Holy Sepulchre is found. This basilica was destroyed by the Persians in 614 and was never rebuilt. The excavations in the cave itself and in the Chapel of St. Helena have revealed the foundations of the Constantinian Martyrion.

It seems that the cave was excavated during the 11th century, and the Crusaders transformed it into a crypt. Archaeologists are of the opinion that the cave was an Iron Age quarry, which was not in use during the time of Jesus, and which formed part of the whole complex of quarries around Calvary. The crypt still has a Crucifixion scene in the apse, that seems to come from the time of the Crusades (1160). The Crusades also built the chapel of St. Helena above the crypt, with its octagonal drum and dome. Above the church was the cloister of the canons of the Church of the Holy Sepulchre Basilica, which nowadays houses the monastery of the Ethiopian monks, known as Deir es Sultan.

The tradition of the Finding of the Cross was formerly celebrated in the universal Church by a liturgical feast on 3 May. The other feast, namely the Exaltation of the Cross, commemorating the recapture of the relics of the Cross by Emperor Heraclius after the Persian invasion of 614, and the consecration of the Constantinian Basilica of the Holy Sepulchre, has been retained. In Malta the Franciscans, until a few years ago, continued to celebrate both feasts, and on 3 May they celebrated with solemnity the feast of the Cross in the churches of Saint Mary of Jesus in Valletta and Rabat. Unfortunately this Franciscan tradition has been dropped. The feast of 3 May is still celebrated with solemnity in the town of Birkirkara, in the Collegiate Basilica dedicated to St. Helena.