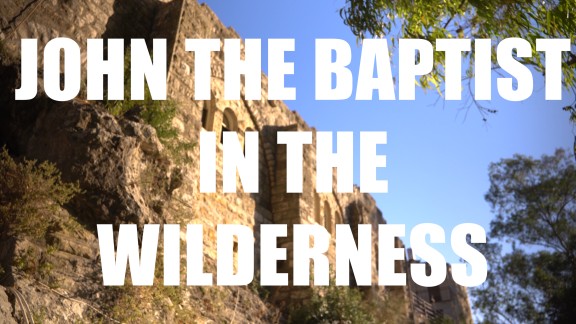 The Monastery of John the Baptist in the Wilderness

The crusaders built the first monastery here next to a Grotto and spring since the Arabs named it ‘Ain el-Habis” which means “the spring of the Hermit,” which might be John the Baptist.

Luke tells us that John “grew and became strong in spirit, and lived in the desert.” Luke 1:80.

As you can see in the video, we are not in the desert. On the contrary.

People will say that “desert” can also mean a wild and deserted area where you can connect to yourself and to God.

Throughout this video, you will see that this area fits the definition of “Wilderness” and thus can also fits John’s description.

The monastery is built next to a spring on a wooded slope, just south of Jerusalem and not far from Ein Karem, where John was born.

I took this video on June 23rd, a day before we celebrate the Nativity of John in Ein Karem. This evening, we conduct vespers to commemorate John the Baptist as grown by spirit here in the wilderness.

The ceremony always starts inside the chapel and then continues outside near the Grotto.

The Grotto is at the lower level of the monastery. Right next to it, there is a pool with a fountain in the middle.

According to tradition, John had lived until he started preaching in this Grotto.

At the backend of the Grotto, on the wall, there is a fresco of Elizabeth hiding baby John after Herod ordered to kill all babies since the Magis told him that a king for the Jews was born but did not tell him where he was.

I highly recommend entering this Grotto and spending some time inside. You can get the feeling of living inside a Grotto in the wilderness.

Just outside the Grotto, there is a place where one can purify oneself by the spring water.

At a lower level than the Grotto, there are two graves of friars who were unique and special:

To read more about them, you can click on each name above.

After you enter the compound, and just before you head down toward the monastery, there is a road leading to a church where the ashes of Saint Elizabeth, mother of John the Baptist, are buried.

The church is at the highest point in the compound. Thus, there is a beautiful view from there. It is a 10 minutes walk, and it is worth it.

That is for today, and until we meet in our next video, let’s live the Jerusalem Experience!