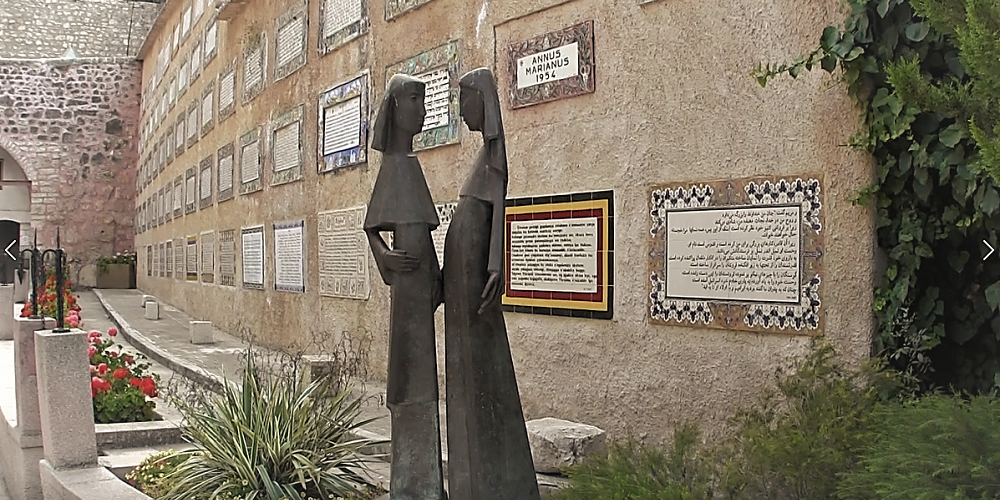 Church of the Visitation

Today we are visiting the Church of the Visitation Ein Karem Jerusalem which marks the place were Mary, Mother of Jesus, had met her relative Elizabeth after the angel Gabriel revealed himself to Mary and told her she was pregnant with the son of God, and that also Elizabeth is expecting a baby – later known as John the Baptist.

Excited by the news of the two pregnancies, Mary hastened to her relative Elizabeth in Ein Karem, which is located south west to Jerusalem and is also known as the city of Judah in the New Testament.

According to Christian tradition, the site of the Church of the Visitation was a summer home where Elizabeth and her husband Zacharias resided so that Elizabeth could conceal her pregnancy with John. And not their house where John was born where today stands the Church of St. John the Baptist

Right after the entrance is a sculpture depicting the slim figures of Elizabeth and Mary. During that meeting Elizabeth felt that john bowed to Jesus while they are both in their mother’s womb, and called Mary “mother of my lord”. In response Mary responded with a prayer of thanksgiving that became a part of Christian Liturgy. The Words of this prayer “the Magnificat” written on these walls in 58 languages and here the prayer title embedded in the floor of the gate.

The façade of the Church is adorned with an impressive mosaic, portraying Mary on her way from Nazareth to Ein Kerem as it is described by Luke “And Mary arose in those days and went into the hill country with haste into a city of Judah”

The church has two chapels on different levels. Our tour begins in the lower one.

The lower level of ancient churches is often used as a burial place, but here the cave is designed under the tradition that this site was Zachariaa and Elizabeth’s summer home.

Over there is the altar of this chapel and above it are impressive frescoes featuring realistic scenes from the lives of Elizabeth and Zacharias.

Here is a portrayal of Elizabeth’s meeting with Mary. To the left, Zecharias the priest is seen preparing incense in the Temple and the fresco to the right depicts roman soldiers about to kill babies by the order of King Herod after he was told about the sign in the skies over Bethlehem marking the birth of a new king.

At the left of this fresco we see an angel directing Elizabeth to hide John in a narrow crack that miraculously opened up in the mountainside. Here beneath the painting is the Rock of Hiding, said to be the rock that covered the crack where Elizabeth hid John.

This church is dedicated to women in general and to Mary in particular. At the rear of the church above the organ there is a wall painting of Mary and her son and the upper part of the apse is adorned with paintings whose central character is Mary. Above here, beneath the dove representing the Holy Spirit, angles sing to her and prepare to crown her with a wreath. Mary is pictured in a desert setting, dressed in red representing the earthly world and with a blue cloak representing the spiritual world – together symbolizing Mary’s resurrection after slipping into eternal slumber.

If we look in front of the aps we can see the remains of byzantine and Crusader churches, on which this church was built

The walls opposite the windows are decorated with five huge frescos depicting Mary’s titles:

That is for today, and until we meet in my next video let’s all live the Jerusalem Experience!