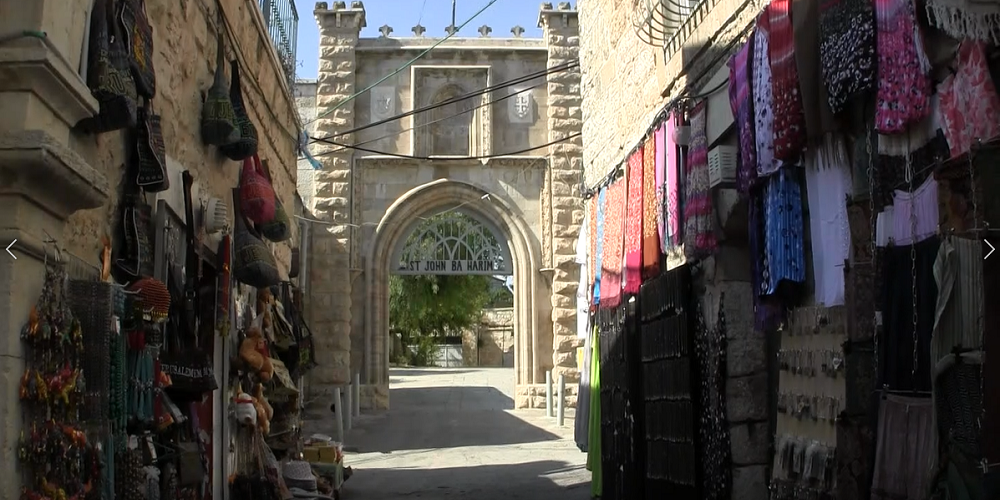 Church of Saint John the Baptist

Today we are visiting another church in Ein Kerem, a small village outside Jerusalem which hosts several churches and monasteries related to John the Baptist. It is the Church of Saint John the Baptist and it stands at the spot where John the Baptist’s parents’ home stood – and therefore marks John birthplace.

Now let’s enter the Church courtyard. Here on the wall there are stone tablets with the word of the Prayer known as the Benedictus (Latin for “blessed”) translated into 31 languages. This is the payer that Zechariah prayed as thanksgiving to god for the birth of his son.

The current church was built in 1674 and incorporates the ruins of earlier churches as we can see in this closed area. Here at the entrance to the church you can see a section of a byzantine mosaic floor bearing the Greek inscription “Hail martyrs of God” commemorating the children Herod’s soldiers murdered in their search for the newborn king.

At the left side of the main apse, is a crypt leading to a small cavern where according to Christian tradition John the Baptist was born. The Arch above the entrance bears the opening line of Zacharias’ prayer of Thanksgiving – Benedictus Dominus Deus Israel. The painting above the opening depicts John baptizing Jesus while the holy spirit looks over them like a dove. The exact spot where John was born is under the unadorned altar and it is marked by a marble star.

To the right of the main apse, a painting attributed to El Greco, a famous Greek born Spanish painter, hangs behind an ornate, wrought iron door. The Painting envisages Elizabeth’s meeting with Mary while Zechariah is watching over Elizabeth’s shoulder.

The main funding for rebuilding this church, and then for renovating it in the 19th century, was given by the Spanish royal family. This is why when you cross the threshold of the church you get the sense of being transported back to medieval Spain: the blue glazed tiles, the painting and art work made by Spanish artists, and even the Spanish royal coat-of-arms.

That is for today, and until we meet in my next vidoe, Let’s All Leave the Jerusalem Experience!