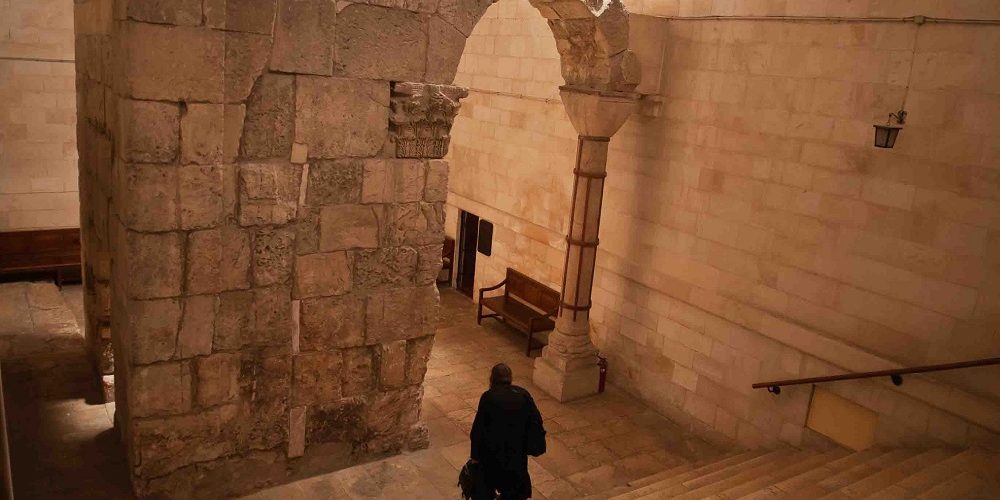 Origin of the Name

The Russian Alexander Nevsky Church is one of the well known shrines within the Russian Orthodox complex of the city of Jerusalem, and it is popular for housing the remains of the 4th century Church of the Holy Sepulchre.

The name of the church was given by the Russian prince named Alexander Yaroulavitz who expelled Swedish and German invaders from Russia back in 1242 at the “Battle of the Ice”. The name “Nevsky” was derived from a river called Narva where the Swedish army was defeated.

Now let’s enter the church. As we get further inside the church we can see to the right, an arch from a pagan temple built in the time of Emperor Hadrian who demolished Jerusalem. This arch is the remainder of a large Arch, one out of 4 that were built here in Jerusalem by the Roman Emperor Adrianos.  Another famous arch of these 4 arches is the Ecce Homo Arch at the beginning of the Via Dolorosa.

Now let’s have a look at one of the most important discoveries of the excavations that took place in this church. Over there are the remains of massive walls from the time of King Herods, and an opening between them. Since we are not far from Calvary there is no doubt that this place was the Threshold of Judgment Gate which was the edge of the city walls in the time of Christ. To the left you can see a hole made in the wall for the stakes of the gate’s doors – this hole is called the “Eye of Needle”.

In front of us is a Crucifix fixed on a large stone from Calvary and below, enclosed by a wooden frame and covered with Glass, is a stone of an ancient road on which Jesus had walked as he exited the city walls to his crucifixion at Calvary. According to that, this should be the place of station number 7 of the Via Dolorosa where Jesus falls for the second time as he stumbled on the city wall thresholds.

Here on the wall next to this threshold we can see planks with names of people that have donated for the excavation in this place.

Now let’s see one of the highlights of this church which is not yet open to the public, but you have the privilege to see it.  Over there behind the excavation cover, there is a column which was part of the main entrance to the basilica of the Holy Sepulchre that was built by Constantine in 330 AD. The column is quite unique since it is made of black stone which is not available in the vicinity of Jerusalem; hence the stone was brought here from a distance to mark an important place. In Roman time, the main entrance to the basilica was part of the Roman Cardo – the main road built by the Romans that crossed old Jerusalem. Today we can see remains of these columns, like the one at station number 7 of the via dolorosa, and others at the excavation site of the Cardo in the Jewish quarter – you should notice that all the these columns are made of white stone.

Now let’s get back to the center of the church. The Picture on this wall depicts Jesus walking with his cross as he exits the city walls – which was right here – on the way to Golgotha.

From here we should enter the church that was built at the other side of this site. At the center of this Russian church there is a stone altar which was built over another stone altar that was found here, and was probably part of a chapel in the Constantinian Basilica in which several holy places were united under one roof.

Here is a tomb representing the holy sepulcher of Jesus, as is found in many Russian churches around the world.

High up along the walls of the church there are paintings of Christian saints, and below them, pictures of Jesus during his last day before his crucifixion. Here is Jesus during the Agony in Gethsemane and his arrest, Jesus along the Via Dolorosa, Jesus’ body being prepared for burial, the angle tells Maria that the tomb is empty and here Jesus after his resurrection.

On the lower parts of the walls, we can see icons of Mary and her son, a picture of Jesus and a picture of Veronica with the image of Jesus on her Veil.

That is for today, and until we meet in my next video let’s All live the Jerusalem Experience!