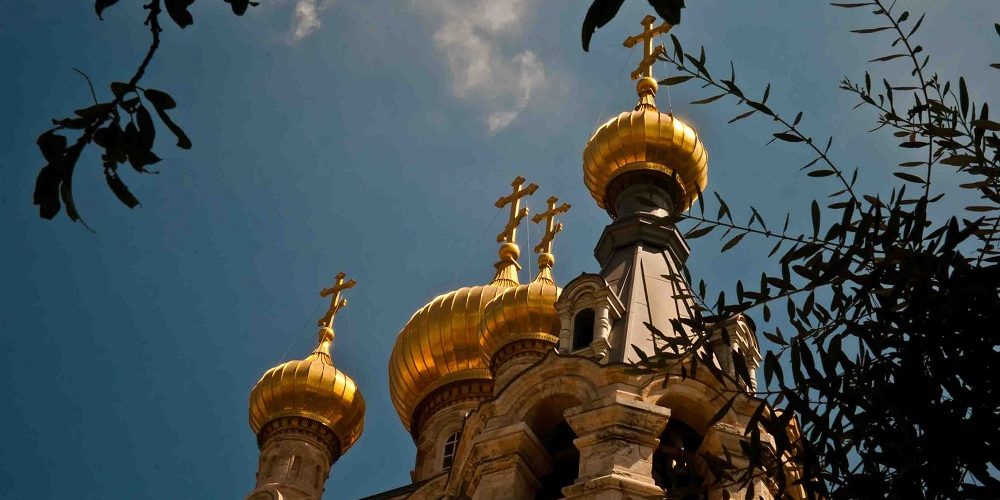 And today we are visiting the Russian Orthodox Church of Mary Magdalene Jerusalem at the Mount of Olives here in Jerusalem.

Mary Magdalene, whose name presumable stems from “Mary of Magdala”, a town on the western shore of the Sea of Galilee, was one of the followers of Jesus. She attended both the crucifixion and the burial and was the first to discover the empty tomb, the first to meet Jesus after the resurrection and the first to inform his disciples of such – according to the Orthodox, Mary Magdalene perceived as a messenger of Christ to the Apostles thus there are many churches around the world in her honor.

Pictures of the Church of Mary Magdalene:

For Pictures from the Church of Mary Magdalene – Click here for the Mount of Olives Gallery .

The structure of the church of Mary Magdalene Jerusalem Israel  reminds its visitors of Mother Russia or more precisely the Kremlin complex in Moscow. The Church has seven Onion shaped domes, each crowned by a tall gilded Russian orthodox cross. Above the entrance, there is a gabled roof with a circular blue mosaic framed in Gold depicting Mary Magdalene piously robed in white.

Now let’s go inside the church of saint Mary Magdalene Jerusalem. On the main wall we find a painted canvas by the famed Russian painter Alexander Ivanov. The painting depicts Mary Magdalene handing an egg to the Emperor Tiberius. A cording to the legend Mary traveled to Rome to complain about Jesus unfair trial and sentence. She brought with her a white egg symbolizing Jesus pure soul. However, when she handed the egg to Tiberius the egg turned red, thus becoming a living symbol of Jesus’ blood and resurrection. Quite possible that this is the source for the Easter tradition of dying eggs in red.

The most sacred item in this church, in a specially carved wooden icon-case, is the miracle-working icon of the Mother of God ‘HODIGITRIA’. This icon came from a church in Lebanon back in the 16th century when it miraculously survived a fire that consumed the church. Later it healed many people during a cholera epidemic. To this day believers receive miraculous help from the Mother of God after praying before her holy icon.

Here in the marble sarcophagi, are the remains of the Grand Duchess Elizabeth Fyodorovna, granddaughter of Queen Victoria of England and the wife of the Grand Dukes Sergei who initiate the construction of this church during the 19th century.

The church of Mary Magdalene Jerusalem stands in the Garden of Gethsemane, the place where Jesus spent His last night on earth. Also found on the convent grounds are the remnants of a pre-Roman road, the biblical entry to Jerusalem through which Jesus walked on during his procession into Jerusalem.

There are many caves in the Garden of Gethsemane which the Church tells us were used by Christ and his Disciples for prayer. One large cave in the grounds of the convent is used as a chapel, where the sisters meet to read their evening prayer rule.

Outside the church of Mary Magdalene Jerusalem courtyard, stand a pillar marking the spot where, according to the Russians, Judas Iscariot kissed Jesus and by that identify Jesus to the Roman soldiers.