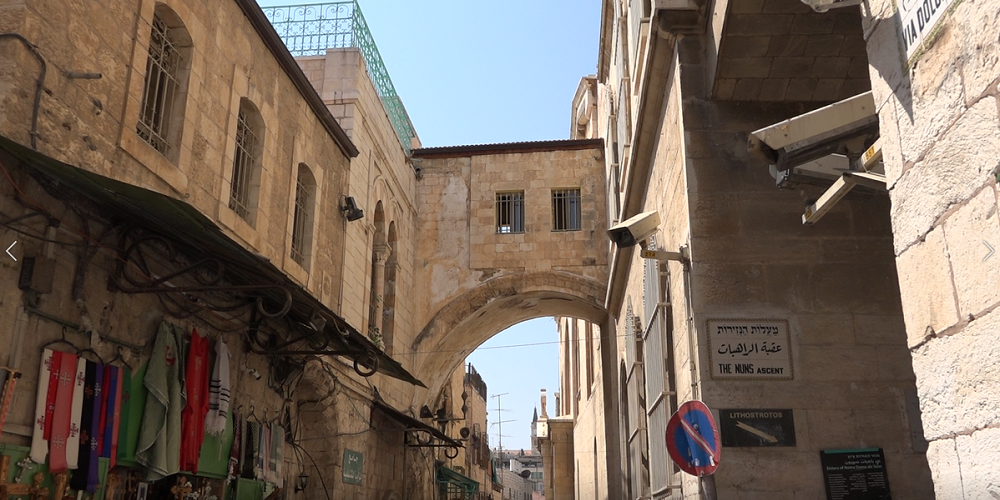 In Today Ecce Homo Arch Video, we are visiting a site which is not part of the 14 stations along the Via Dolorosa, yet it captures some interesting stories related to Jesus and his last walk on earth.

We are now standing near an Arch which is called today the Ecce Homo Arch. For generations, pilgrims had associated the arch with the words “Ecco Homo” which means in Latin “here is the man” and thus the belief that here it is where Jesus’ fate was sealed by Pilate. The New Testament recounts that when Jesus was dressed in bogus royal attire in mockery of his claim to be “king of Jews”, Pilates presented Jesus to the crowed declaring “Ecco Homo”/”here is the man”.

Now let’s enter in to the Notre Dame de Sion, a Convent built by a Converted Jew, Mr. Mare Alphonse Ratisbonne. Today, the nuns at this monastery preach the love of Israel among the Gentiles.

Now let’s go back in time to when Ratinsbonne bought this place in 1855. Right after Ratinsbonne bought the monastery, excavating work at the monastery’s foundations discovered that the arch that we see outside is part of a victory gate that was built by the Roman Empire, Hadrian, after crushing the Bar Kochba revolt in Israel and destroying Jerusalem – 100 years after Jesus was crucified. Hadrian established a pagan city named Aelia Capitolina on top of the ruins of Jerusalem. At the place of the site, in the entrance to the city, a large square was built called the forum, and a triumph arch was placed. The arch that we see right here is part of the central portion of Hadrian’s arch.

We shall now explore some interesting archeological findings that were uncovered during the excavation of the monastery foundations. In 1864 a hidden pool that was built some 1700 years ago was discovered. Encourage by the archeological finding the nuns of the monastery start searching for links to events described in the New Testament. Imagine their excitement when a paving stone was discovered with traces of game board etched into its surface along the letter B, standing for Basileus, the Greek word for “King”. The game was played on throwing a dice determined player’s advance in a race to the King’s tower at the center of the board. The game concluded with the execution of a monk king. The nuns deducted that the Roman soldiers who robed Jesus and crowned him with thorns were the very ones that etched the game in to the paving stone so here is where Jesus trial was conducted.  The archeologist claims that this board belongs to the Roman forum built next to the triumphal arch, a century after the trial of Jesus. As a compromise, the archeologist prepared to admit that its is possible that these paving stones were brought here from the courtyard of the demolished Antonia Fortress where we today believe is the place where Jesus were trialed.

I hope you enjoyed this video.