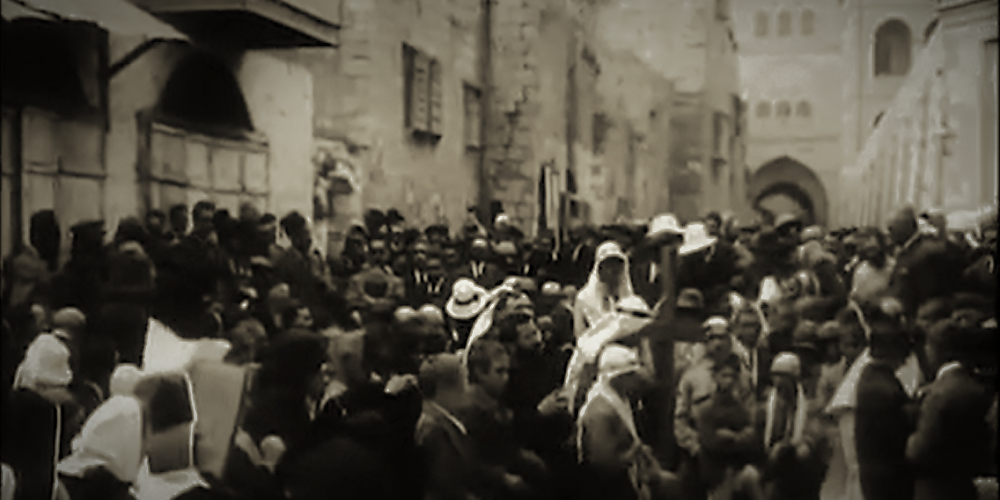 This rare amateur film displays daily life in the Old City, Western Wall, the market on Jaffa Street, Damascus Gate, Mount of Olives and Temple Mount. The film also shows part of the Good Friday walk along the Via Dolorosa that year. My contribution to this video is in the editing work. I added footage videos from today (2012) that I have taken in Jerusalem at the same places being shown in the film, so you can watch the original film and compare the sites with how they look today.

To my opinion the most interesting part is the section that depicts the walk of Good Friday in 1925 along the Via Dolorosa. The Film shows station1 where the the Trial of Jesus took place. then it continue to Via Dolorosa station 2 at the church of the flagellation and condemnation of the cross. In the file we do not see these 2 churches since the walk stop outside the plaza of these 2 churches. from there we see the people walking to stations 3 & 4 and from there to station 5 of the via dolorosa where the roman soldiers made Simon to help Jesus carrying his cross. Since this is not so clear in the file i have pointed with an arrow to the station. the same is at station 6 where Jesus meets Veronica. As you can see the difference in the film of Jerusalem 1925 and today is very minor – today we have shops around the root of the Via Dolorosa. From here the film move to the church of the holy sepluchre where the last 5 stations of the way of the cross are located. the Film does not take us inside the church – probably because in year 1925 there was not enough light to film with the equipment that was available back then, so the film is showing the ceremony of taking in and out the cross from the church of the holy sepulchre.

That is for today, and until we meet again in my next video, Let’s All leave the Jerusalem Experience !!!