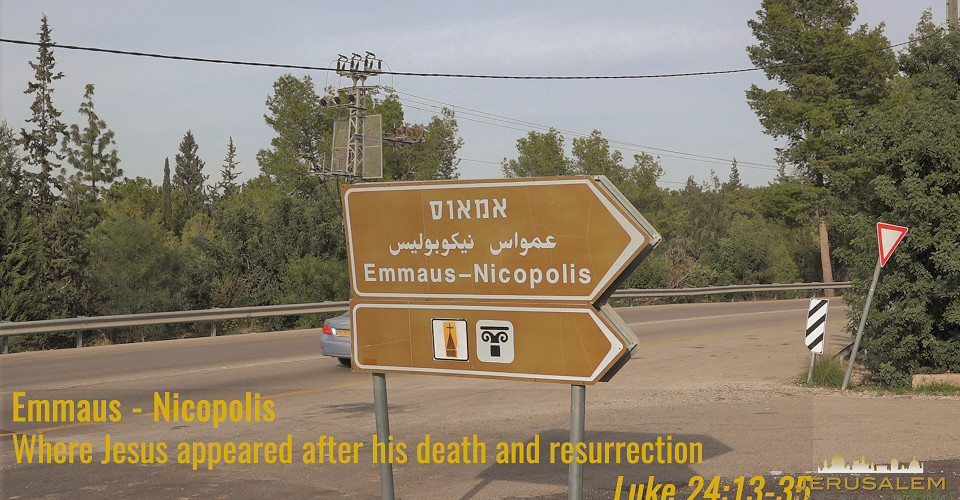 Today we are visiting the site of Emmaus Nicopolis which was the Roman name for one of the towns associated with the Emmaus of the New Testament, where Jesus is said to have appeared after his death and resurrection.

Emmaus is located near Latrun on route number 1 from Tel Aviv to Jerusalem. The name Emmaus is after the seat of the Roman Emmaus while the name Nicopolis was the name of the city established during the 3rd centruy CE until it was conquested by the Muslim forces of the Rashidun Caliphate in year 639 AD with the complete conquest of Palestine.

The name Emmaus may has been derived from the Hebrew “Hammat” meaning “hot sprint”. A sprint of Emmaus or alternatively a “spring of salvation” is also mentioned in Greek sources.

The Gospel of Luke mentions Emmaus as the village where Jesus appeared to his disciples after he died on the cross and then resurrected from his tomb.

Now that same day two of them were going to a village called Emmaus, about seven miles[a] from Jerusalem. 14 They were talking with each other about everything that had happened. 15 As they talked and discussed these things with each other, Jesus himself came up and walked along with them; 16 but they were kept from recognizing him – Luke 24:13-16

According to Judaism, only men are counted as a viable witnesses thus the meeting of Jesus at Emmaus after his resurrection with two men is considered the first evidence that Jesus as resurrected from his death.

In our tour of Emmaus Nicopolis we shall see the following:

1. The remains of the Crusader Basilica (12th century) stands over the 5th Century Byzantine church.

2. Remains of the Northern Basilica – 5th to 6th century.

6. Ancient Tombs: Jewish tomb from 1st century AD at the lower level and above it Roman-Byzantine tomb from 3-4th century AD.

7. The Catholic community of the Beatitudes that was founded in France in 1973 and its community in Israel has been present since 1975. Since 1993 the community have welcomed pilgrims and visitor the holy place of Emmaus and taken care of the archeological site.

That is for today and until our next video let’s all live the Jerusalem Experience!

Miracle of The Holy Fire in Jerusalem