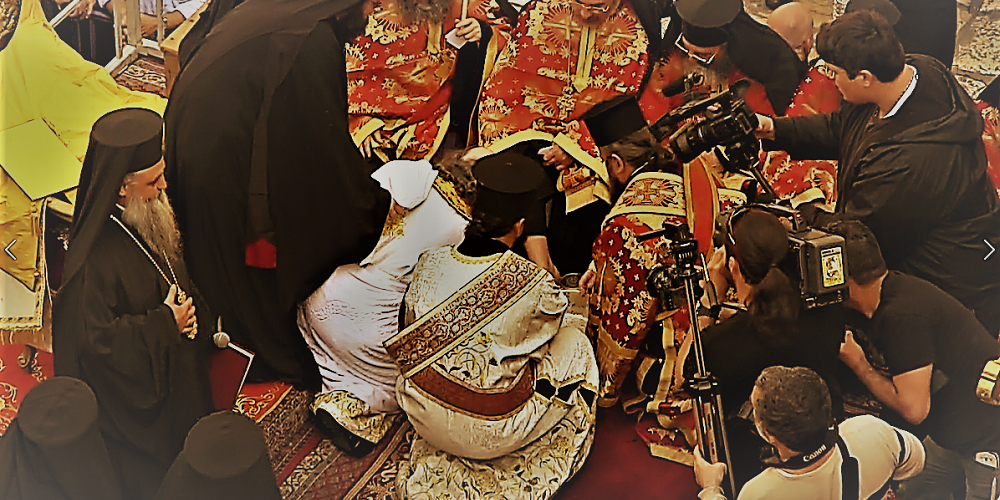 The root of the practice of foot washing appears to be found in the hospitality customs of ancient civilizations, especially where sandals were the chief footwear. The Foot Washing was an element of hospitality normally performed by servants or slaves, and a mark of great respect if performed by the host. In John 12, Mary of Bethany anointed Jesus’ feet presumably in gratitude for raising her brother Lazarus from the dead.

In today video, I am taking you to participate in three Holy Thursday orthodox ceremonies of Foot Washing here in Jerusalem (Catholic Washing of the Feet). The first ceremony is the Greek Orthodox which is taking place right in front of the Church of the Holy Sepulchre. We shall watch the Greek Patriarch wash the feet of 12 of his church members here in Jerusalem. The second ceremony is the Armenian Orthodox and it takes place inside the Saint James Church within the Armenia Quarter. The third and last one is the ceremony of the Syrian Orthodox at the Saint Marks’ Church which is located on the border between the Armenian and the Jewish Quarter. According to the Syrian believe, this church is the actual location of the Last Supper Room where Jesus washed the feet of his 12 disciples.

At the eve of Passover (Pesach), Jesus met with his disciples to have the Passover dinner which has become The Last Supper. As Jesus met his disciples he offered them to wash their feet. As recorded in the Gospel of John, Jesus start washing the feet of his Apostles. When they asked him why he does that, and that they need to wash his feet, Jesus explained to his disciples the significance of his action of washing their feet; John verses 13:14-17 (14) “If I then, your Lord and Teacher, have washed your feet, you also ought to wash one another’s feet.” (15) “For I have given you an example, that you should do as I have done to you.” (16) “Most assuredly, I say to you, a servant is not greater than his master; nor is he who is sent greater than he who sent him.” (17) “If you know these things, blessed are you if you do them.”

That is for today. And until we meet in my next Video, Let’s All Live the Jerusalem Experience!!!