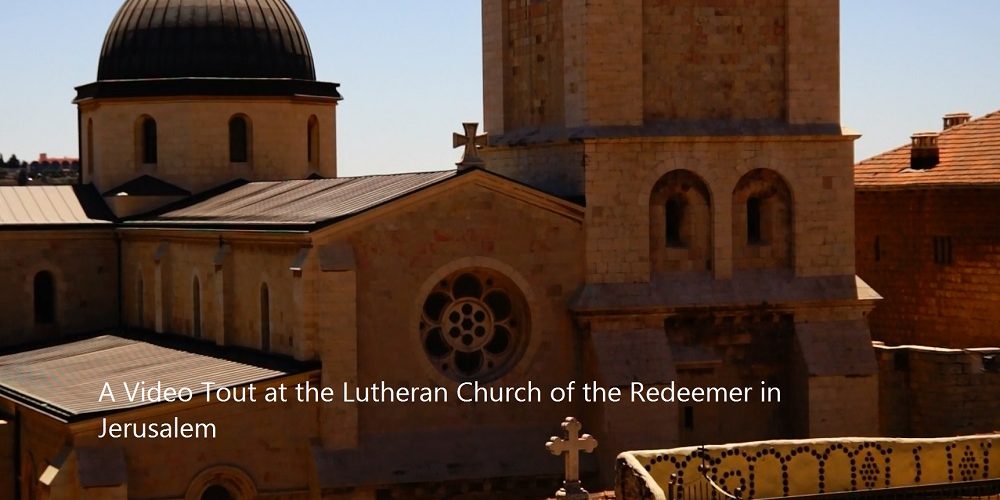 The Lutheran church of the Redeemer is a German Lutheran Protestant church and it is one of only 2 protestant churches in Old Jerusalem. The second one is the Church of Christ which is located opposite to the entrance to the tower of David near Jaffa gate.

The church of the Redeemer is located in the Christian quarter right next to the Church of the Holy Sepulchre and within an area called “Muristan”, a name derived from the Persian word “Bemarestan” which mean “Hospital”, as a reflection to the Crusader hospital that was there together with other churches helping and serving the sick and wounded Christian warriors.

I would like to give special thanks to Deutsches Evangelisches Institute www.deiahl.de for the information they are providing to the public and for the model from which I have made slides that I am using in my video

One of them is the nearby Church of Saint John the Baptist that is built on top of the ruins of a 4th century church, considered to be one of the ancient churches in the holy land.

Starting in 1113 this byzantine church hosted the order of St. Benedict which later evolved into the Order of John the Baptist and was also called the “Knights Hospitallers of St. John”.

The church of the Redeemer that we are visiting today was inaugurated on Reformation day in 1898 with the presence of Kaiser Wilhelm the 2nd during an historic visit to the Holy Land as the first Western rulers to visit Jerusalem.

During his visit, Kaiser Wilhelm accompanied with his wife, Augusta Victoria, also laid the corner stone for a hospital located on top of Mount of Olives and named after his wife.

The new church of the Redeemer is designed in a neo-Romanesque style.

At the entrance to the church we see Christian and Prussian symbols. In the middle is the Symbol of the Lamb of God, which is a Lutheran icon based on the verse by John “The next day John seeth Jesus coming unto him, and saith, behold the Lam of God, which takenth away the sin of the world” (John 1, 29) To the left is the Eagle with folded wings, a German imperial sign, adapted in the 9th century by Charlemagne, the first Frankish king to gather the German people into an empire.

To the right is the Maltese cross, which was the symbol of the Crusaders orders of St John, the Baptist.

Now let’s find what is so interesting and unique about this church of the redeemer.

Although the church of the Redeemer is the newest church in the old city of Jerusalem, underneath the church, there is an excavated area that ends the controversy over whether or not the Church of the Holy Sepulchre is located at Golgotha.

The first thing to see is an archeological pear that exposes layers of land from different periods. The deepest point, 14 meets, is a layer of worked surface which tells us that the area of the church was part of a huge quarry which was used for the construction of ancient Jerusalem and later on, for the expansion of the city in the time of Herod the great.

At the hedge of the Quarry, there was a soft rock area which was not good for work material thus was not quarry and over time became the hill of Golgotha.

When the quarry was no longer needed, it was washed and filled with sand and mud.

Eventually gardens emerged and for this reason, Joseph Flavius named the nearer northern gate of the city – the garden gate.

During the excavation work, a garden wall was discovered together with 3 layers of the earth along this pear showing evidences of agriculture.

Although these evidences mark the site of the crucifixion, they also support the believe that the via dolorosa as we know it today is not accurate.

Yes, the crucifixion site is where today the church of the holy sepulcher, BUT the journey did not start at the Antonius fortress and along the via dolorosa as it is marked today. Some believe the trial of Jesus started at Harod’s palace in the west side of the old city where Pontius Pilate resided during Jewish holidays, and Jesus last journey past through the Garden gate to Golgotha.

In year 70 AD, Jerusalem were intensively destroyed by Titus and for 60 years the city laid in ruins. In year 135 AD, Emperor Hadrian filed the quarry and in the midst of the new city named Aelina Capitolina, some buildings emerged including a temple for Aphrodite. A gate of this temple can be seen nearby at the church of Alexander Nevsky for which I have a special video.

In year 325 AD, Emperor Constantine accepted Christianity as the Roman empire religion and built a massive church at Golgotha with a cardo to the east and a forum to the south. During the excavation at the church of the redeemer a wall to the south part of the forum was discovered – and we can see it right here.

At first it was believed that this wall used to be part of the old city wall. This is why in 1883 when the construction of the new church of the Redeemer began, the Foundation Stone of the church was laid on top of that wall.

In year 1009 the church of the holy sepulcher was destroyed by the Muslims and the 1st crusade began.

When the crusaders regain control of Jerusalem they rebuilt the church of the holy sepulcher in a new form and to the south built the Italian Church of Saint Maria Latina. Part of an old mosaic floor of that church can be seen today at the excavation area. Later this church functioned as a hostel and hospital for the wounded crusaders.

When we exit the excavation we reach a beautiful garden and a museum that tells the story of the church and the area in more detail.

Now let’s visit the tower of the church which is the tallest bell tower inside the old city and reach the height of 7 floors above the ground.

A narrow spiral stair of 177 steps will take as to the top of the tower. It is a dizzy clime but the view from the top absolutely worth it.

To the sought west we can see the dome of the Church of St. John the Baptist which we talked about earlier. To the north west is the Church of the Holy Sepulchre and to the east is temple mount with the Dome of the Rock and behind it, Mount of Olives.

That is for today, and untill we meet in our next video let’s all live the Jerusalem Experience!