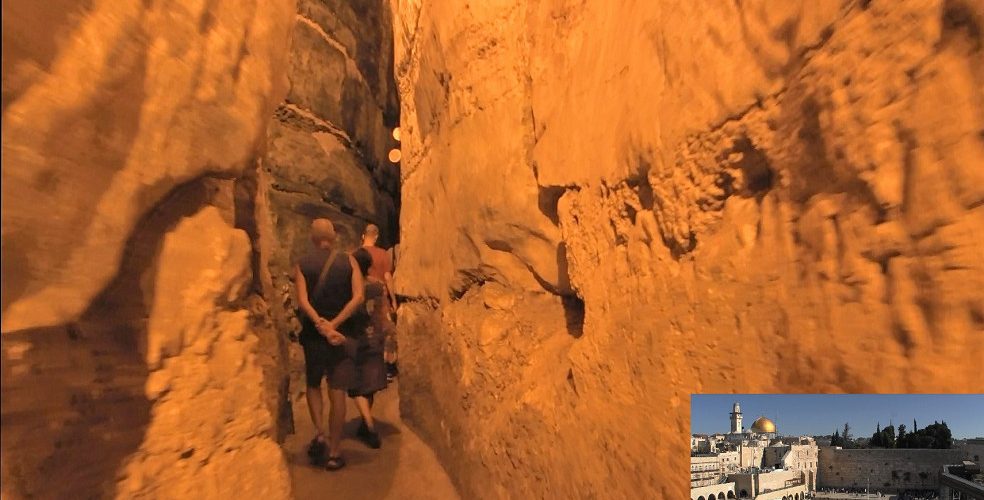 Now let’s start our journey back in time to the time of Jesus. But first let’s learn about the history of the temple mount, the area surrounding it and what has created these western wall tunnels.

The mountain on which the first and second temples were constructed is called in hebrew Har HaMoriah and it is associated in Judaism with the location of Abraham’s binding of Isaac on top of the foundation stone which is consider the stone from which the world was founded.

On this mountain King Solomon built, in 957 BC, the 1st temple which was destroyed by the Babylonians in 856 BC.

Almost 600 later, in year 637, when the Muslim took control of Jerusalem they built the Dome of the Rock, a shrine sheltering the rock from which, according to Islam, the prophet Mohammed ascended to heaven. It is the same rock that marks the Foundation stone.

In order to make it easier to access the temple month, the Muslims built a new lifted neighborhood, using arches and supportive structures, on top of the existing buildings and streets from the 2nd temple period next to the western wall. This neighborhood is what we see can call today the Muslim quarter.

In this model you can better understand what we have just described.

Here is temple mount. Here is the current exposed part of the western wall. Here is the area of the Muslim quarter and if we move it aside we can see the ancient neighborhood dated to the time of Jesus right below it.

The first stop on our journey within the Western Wall tunnels is the Wilson Arch which was excavated by Charles Wilson in the mid-19th century. This arch is believed to be a support for a bridge which connected the Temple mount and the city during the 2nd Temple Period.

Here we can see the complete arch (one of several) as it supports the bridge into the temple mount during the time of Jesus. Here below is the street level where today it is part of the exposed western wall which is also called the Wailing Wall. When we visit the Wailing Wall plaza today we can see part of the Wilson arch at the North side of the praying area.

Here below the Wilson arch we can see part of a Mikveh (one of many in this area) where people used to purify themselves before entering the temple mount.

Now let’s continue our tour and get closer to the Western Wall where we shall walk along the part of the wall which has not been exposed to sun and the forces of the weather for almost 1000 years.

One of the most interesting finding of the western wall itself is a huge stone, often called the western wall stone. The stone is used as a supportive stone to the construction of the western wall and it is considered to be one of the heaviest objects ever lifted by human beings without powered machinery. The stone has a length of 45 ft, height of 9.8 ft and an estimated width of about 15 ft. Estimates place the stone weight at 570 tons The stone is so big that it’s weight is about the weight of 3 Boeing 747 aircrafts. Can you imagine?

Now let’s continue walking to the north, along the western wall and reach one of the holiest places for Jewish people. It is the Warren’s Gate which is about 150 feet into the tunnel. This gate marks the closest point to the holy of holies, the inner sanctuary is is currently thought to be located under the Dome of the Rock so you can imagine the conflict around this point.

This is why people, as these women, pray here so their prayer will be accepted by God.

The Northern Part of the tunnel

This road is one of the few places in Jerusalem, and of course in the world, that we can be 100% sure that here Jesus actually walked.

Excavating works along this road revile archaeological finding from different period in time. Even that the Roman still used this road and temple mount area after the destruction of the temple and Jerusalem at year 70.

We have just reached the point where the constructed western wall end and we can see the original rock of the mountain.

But this is not the end of our journey. When continuing walking north we shall reach the Struthion pool which originally were built as an open-air pool by the Hashmonaim and used to collect rainwater and then lead them through water system to the temple. After the destruction of Jerusalem by Adrian in 70 AC, he added arch vaulting to enable the pavement to be placed over it as we see it today. The pool that we see now is only one half of the pool, where the second part is behind this wall and today beneath the Convent of the Sister of Zion along the Via Dolorosa for which we have a separate special video.

We are now near the exit from the Western Wall tunnel and as it can happen only in Jerusalem, the exit to the street is right in front the entrance to Station # 2 of the Via Dolorosa, Flagellation and Condemnation, and below Station # 1 where Jesus was put to trial. And all of that within the Muslim quarter.

That is for today and until we meet in our next video, Let’s All Live the Jerusalem Experience!