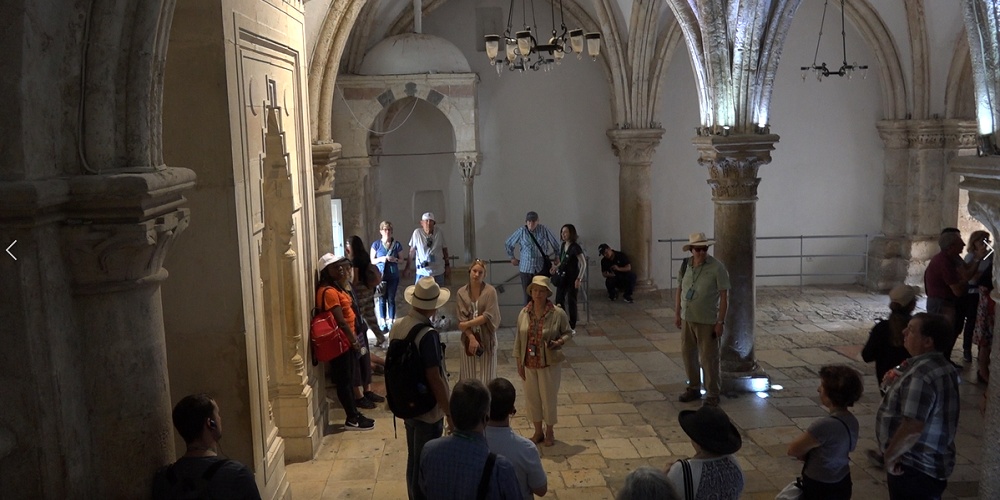 Today we are visiting the Last Supper Room also called Cenacle (from Latin Cenaculum which means “upstairs dining room”) and “Upper Room” here at Mont Zion in Jerusalem right next to the Dormition Abbey and the Tomb of King David.

According to Christian tradition this Upper Room marks the place where Jesus had his Last Supper with his disciples, the evening of his resentment.  All year long, pilgrimage comes to meditate about Jesus and his teaching at this spiritual room – the Last Supper Room.

The Room’s design is a testimony of the religious tug-of-war waged here. It features the Romanesque style arches favored by Crusader architects, together with a Huge Moslem mihrab – a praying niche facing Mecca – dated back to 1522 when the Ottomans seized the site and turned it to a mosque while also constructing a dome and adding stained glass Ottoman windows with Arabic inscriptions.

It is interesting to see that one of the marble columns that support the Dome has a notable capital depicting pelicans pecking their parent’s breast, a symbol of charity and sacrifice in Christian art.

The site of the Last Supper Room was also the usual place where the Apostles stayed in Jerusalem; thus this room is considered the site where many other events described in the New Testament took place, such as:

Over there, there is a small room which is considered to be the place where the Holy Spirit appeared there during Pentecost. This room is closed all year except during visits of high ranking clergy and during Pentecost. Just watch how these lucky pilgrims have the opportunity to stand in this place, and meditate on what happened here during that special time of Pentecost.

At the far corner there is a stair case leading to a lower room where both Christian and Jews consider the Tomb of King David to be, and for which I have a separate video.

That is for today and until we meet in my next video let’s all live the Jerusalem Experience!