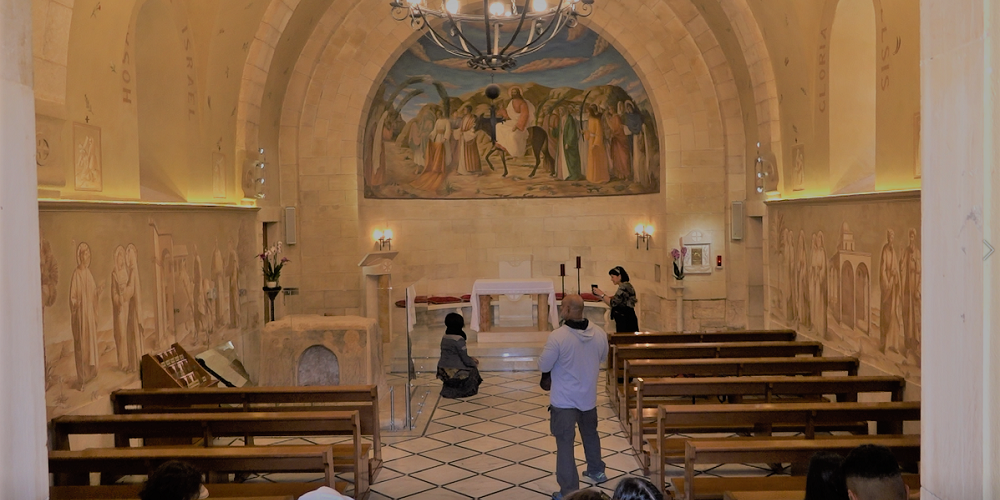 Today I am taking you to visit the Bethphage church Jerusalem which means “House of un-ripe figs” and is located on the eastern slopes of the Mount of Olives.

According to the Gospel of Matthew, here at the Church in Bethphage Jerusalem, Jesus started his riding on a colt, the foal of a donkey, all the way to Jerusalem. Some believe that also here Jesus met Martha the sister of Lazarus after he was dead.

Inside this church Bethphage Jerusalem there is a stone traditionally identified as the one which Jesus used to mount the donkey at the start of his procession into Jerusalem and today, as in the 12th century, pilgrims hold a Palm Sunday procession, which begins at this Church.

The main focus of the church is the Stele of Bethphage, which is set apart by wrought iron railings.

The Stele is decorated with drawings on each side of it. The drawings depict the meeting between Jesus and Martha;

– two disciples bringing Jesus an ass and a colt,
– Lazarus rising from the dead, and a drawing of a crowd of people holding palms.
– Behind the altar is a fresco depicting Jesus riding a donkey to the Jerusalem Temple, accompanied by his disciples.

The church, in bethphage Jerusalem, ceiling features drawings of flowers and leaves. Colored in shades of brown, the wall frescoes portray New Testament era people preparing for the procession.
On one wall a group of rabbi’s hold a scroll which contains the second part of the verse from (John 12:19).

And around the windows, written in Latin, are the words which Jesus spoke during the procession into Jerusalem – Palm Sunday Jesus.

That is for today. Please tell me what you think about this video by leaving a comment below, and until we meet again in my next video, Let’s All Live the Jerusalem Experience!!