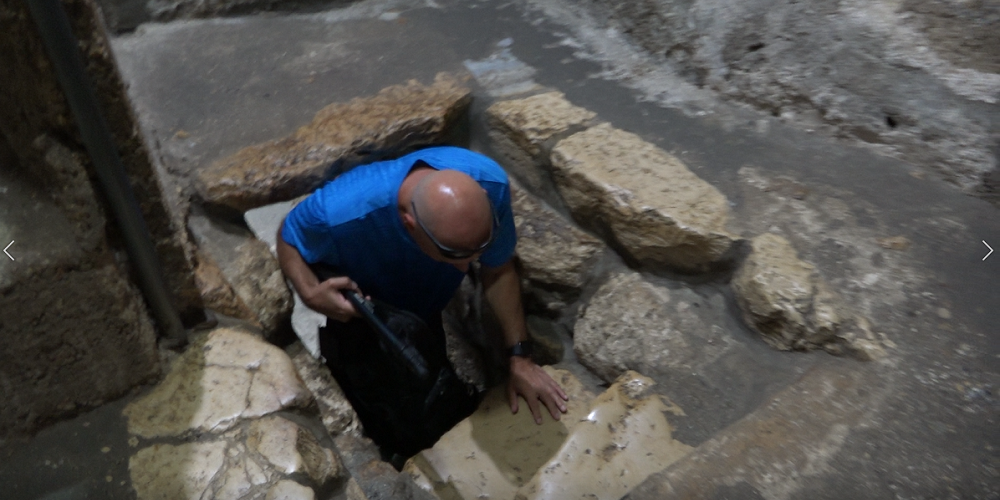 Today we are visiting the Tomb of Lazarus near Lazarus house which was also the house of Marta and Mary.

Bethany was the home of Lazarus and his two sisters: Martha and Mary, and here is where, according to the Gospel of John (Lazarus John 11), Jesus  performed the raising of Lazarus Miracle when he brought Lazarus back to life four days after his death – it is important to point out that the fact that Lazarus was dead for 4 days, made this Jesus Miracle Lazarus the only time in the history were a person came back to live after so many days.

This Miracle of Lazarus raised from the dead, explains the crowds seeking Jesus on Palm Sunday.

The tomb of Lazarus at al-Eizariya, generally believed to be the biblical Bethany, is a place of pilgrimage to this day and it is located on the southeast slopes of the Mount of Olives here in Jerusalem

Several Christian churches have existed at the site over the centuries.  First was a 4th century church called the Lazarium which was destroyed by an earthquake in the 6th century. The present yard contains the remnants of a mosaic floor of that church.   Then a larger church was built and remained intact until the Crusader Area.

In 1143 a Benedictine convent dedicated to Martha and Mary was built near the tomb of Lazarus and today we can find here a Roman Catholic Church of Saint Lazarus which was built in 1995. Also, in 1965 a Greek Orthodox church was built just west to the bomb of Lazarus.

The Tomb of Lazarus:

Today, the entrance to the tomb of Lazarus Jerusalem is via a flight of uneven rock-cut steps from the street. As it was described in 1896, there were twenty-four steps from the then-modern street level, which is the same as today, leading to a square chamber serving as a place of prayer. At this chamber we can see the original entrance to Lazarus tomb from Lazarus house. When the Ottomans built the Al-Uzair mosque, in the 16th Century, between Lazarus house and this tomb, they have blocked this path. Later on, the Franciscans open the entrance that we use today. Here on that opening in the floor there was a stone covering the Tomb of Lazarus and that was removed in order to let Lazarus out. From that window, Jesus called Lazarus to wake up. Now this chamber here below is believed to be the tomb of Lazarus. Can you believe it???

That is for today, and until we meet in my next video let’s All Live the Jerusalem Experience!!