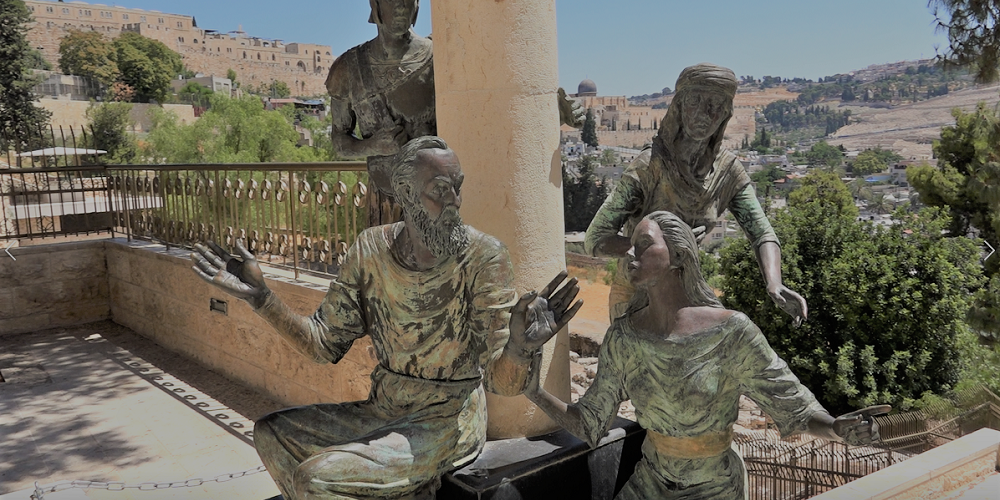 Today we are visiting the Church of St. Peter in Gallicantu Jerusalem, which is built on the eastern slopes of Mount Zion – and thus has a spectacular panoramic view of the Temple Mount, the Mount of Olives and the Kidron valley.

The name Gallicantu means the cock’s crow, and comes from the story of Peter’s triple denial of Jesus and the cock crowing twice.

According to Christian tradition, the church’s location has a double biblical reference: Here Peter shed his tears after repenting for denying Jesus when hearing the cock crows… and here was the palace of the high priest, Caiaphas, where Jesus was held after his arrest at Gethsemane on the night of Holy Thursday.

In the church compound at the main level, there is a statue dramatizing one of the times that Peter denied knowing Jesus. Luke tells us that a servant girl pointed Peter out to the Roman soldiers saying “this man was also with him”. Peter for his part hastened to deny it: “I know him not”

Now let’s go and explore the church, which includes an upper church and a lower large chapel.

The main door to the church bears a beautiful metal leaf depiction of Jesus with his eleven Apostles (Judas is omitted) and in the center of the right door, a cock.

Now let’s go inside the church.

Facing the entrance is an illustration of Jesus, his hand bound, surrounded by a crowd angrily shaking their fists at him.

And here above, Jesus and his disciples are shown partaking of the Last Supper (once again traitorous Judas is left out).

A glance at the ceiling reveals a spectacular cruciform window.

Now let’s move to the chapel beneath the upper church. On our way down we see several mosaics from the 5th century byzantine church that was here before.

This chapel is dedicated to the first biblical reference of Peter’s denial of Jesus, and it is hewn out of the mountainside and some of its walls are made of rock.

Now let’s have a look at the second biblical reference to the location of this church – the pit in which Jesus was held during the night of his arrest and that can be seen from this hole in the ground which is marked with several engraved byzantine crosses.

Now let’s go down to the cellar level, dating back to the second temple period, and housing pits that were, in general, used to hold water as cisterns, to hold grain as granaries, to use as olive press and to use as ritual baths. These cellars probably belonged to a well-known person during the second temple period and according to Christian tradition, here was the palace of the high priest Caiaphas, to which Jesus was brought after his arrest.

Here in this pit, it is believed Jesus was held during that night waiting for his trial by Pontius Pilate, the Roman Governor of Judea.

Just imagine what Jesus felt as he was locked in this pit waiting for his trial, already being aware of his destiny.

Each year on Holy Thursday, pilgrims from all over the world join a candle-light night procession from Gethsemane, the place of Jesus’ arrest, to this church of Saint Peter in Gallicantu, in order to pray and be with Jesus on his last night, before his crucifixion on the day after – on Good Friday.

When we step out of the cellars level we arrive at the church yard which is filled with archeological findings from different periods in Jerusalem’s history, starting with the 1st temple period and upto the byzantine period.

The most interesting finding is a stair case connecting Mount Zion and the upper city to the Kidron valley. According to Christian belief, Jesus, with his disciples, followed this path after they had their Last Supper to the Grotto in Gethsemane where Jesus was captured and brought back along these stairs to be locked in the pit that we have just seen.

This tablet, near the stair case, shows Jesus and his disciples walking from the last supper room to Gethsemane

And this tablet shows Jesus with his hand tied after his arrest, being led back to his jail.

That’s it for today, and until we meet in my next video, Let’s All Live the Jerusalem Experience!