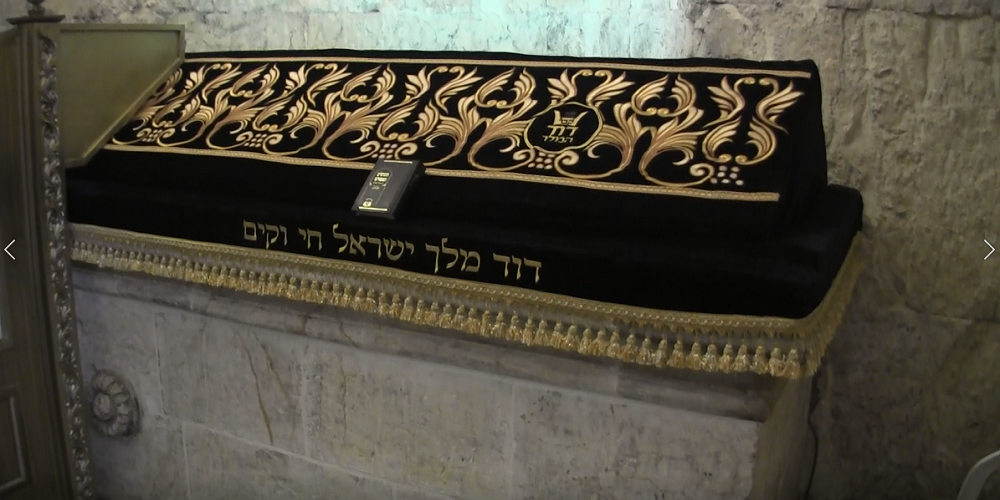 Today we are visiting a place at Mount Zion which is considered by both Christians and Jews to be the Tomb of King David. Both Gospels of Luke and Matthew claim that Jesus was a direct descent of King David, and thus  Jesus is a legal inheritance of the throne.

The Tomb compound is right beneath the room of the Last Supper and it is divided into a large entrance hall that serves as a synagogue ……and the cenotaph room which is divided into separated women’s and men’s galleries. Here behind the tombstone, people leave notes with prayers and wishes from God.

The huge cenotaph over the Tomb of King David is in fact a Crusader Cenotaph, sealing the entrance to a cave that was found during the rebuilding of the Haga Maria Church not too far from here, where it is today the Dormition Abbey Chruch.

Since the crusaders believed that this is the place of the tomb of King David, they also assumed that the room of the last supper should be right above it. They relied on the verse from the Act of the Apostles (2:29) where Peter said to the remnant of Jesus’ devoted followers during Pentecost: “Men and brethren, let me freely speak unto you of the patriarch David, that he is both dead and buried, and his sepulcher is with us unto this day”.

Each year during the festival of Pentecost, a beautiful Christian ceremony takes place at the Last supper room, while at the floor below near the Tomb of King David, Jewish people are praying as part of the Shavuot festival which also marks the time of King David’s death. There is even a tradition of lighting 150 candles in David’s memory – one for each of the 150 Psalms he wrote.

That’s it for today, and until we meet again in my next video, Let’s All Live the Jerusalem Experience!