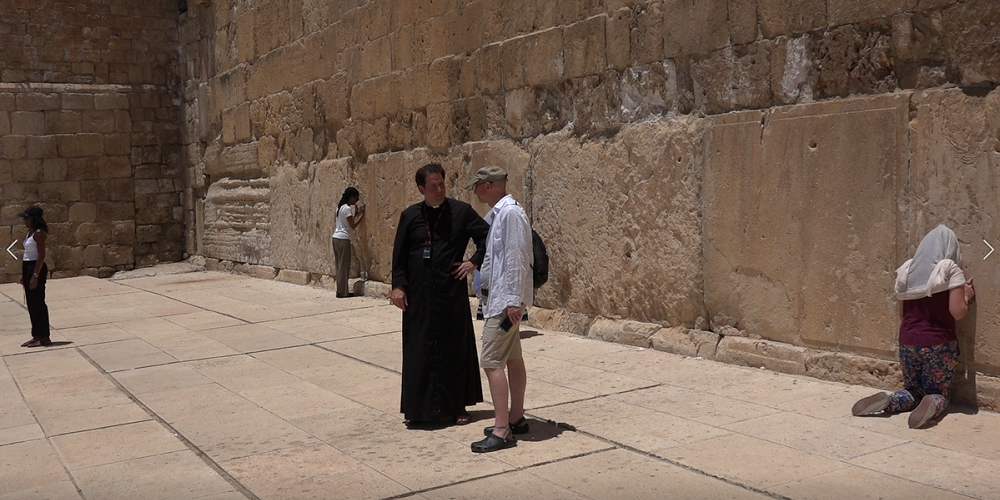 Today we are visiting the Southern Wall of Temple mount here in Jerusalem, together with Mr. Danny Herman who is an archeologist and a tour guide.

This site is very unique in many levels but from a Christian point of view this is such a significant site because it is probably the very place where Jesus walked when he visited the temple as it is mentioned in the Gospels.

The area of the southern wall of temple mount was exposed in the 1970s and it uncovered streets, shops, staircase and gates.

We shall start our today tour at the commercial zone at the edge of the southern wall.

At the south west corner of the Temple mount there are stones that were installed here some 2000 years ago and were uncovered in the 1990s. If we look around we can see sets of shops and vendors stands correlated to the time frame of the 1st century. Archeological findings show that in this area, Jewish people who came to Jerusalem on a pilgrimage to the Temple, used to gather here before entering the temple area. Jesus was such a person. A Jew who came to Jerusalem to visit the temple and maybe also to make an offering to God.

Cleansing of the Temple 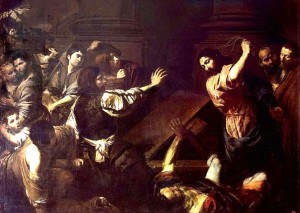 According to all four (4) canonical Gospels, Jesus and his disciples traveled to Jerusalem for Passover, a period when the city was packed with Jews who come from all around the country as it is required in the bible. Some estimate around 400,000 pilgrims. When Jesus see the courtyard being filled with livestock (for sacrifices) and the money changers who changed the standard Greek and Roman money for Jewish currency before entering the temple for a very high commission, he become very upset

“And making a whip of cords, he drove them all out of the temple…., And he poured out the coins of the money changers and overturned their tables. And he told those who sold the pigeons, “Take these things away; do not make my Father’s house a house of trade.” Matthew 21:12-13

Some view the words “my Father’s house” as Jesus making a claim to being the Son of God.

Watching my video, you can imagine all of that happening around this area. It as the Gospels come to life in front of you.

The Stairway to Temple Mount where Jesus has walked on.

In the second part of this movie we shall visit a stairway where Jesus actually walked on.

This is the southern area to the temple mount. We shall see three (3) gates in the southern wall of temple mount which are now supporting the Al-Aqsa mosque, but during the time of Jesus this wall supported a public building made by King Herod. According to the Mishnah (part of the Talmud consisting of a collection of oral religious laws of Judaism) people entered the Temple mount from the right (the triple gate) and exit from the left (the double gate). The three (3) gates that we see today are on the right side of the wall. The stairway that leads to this gate was not preserved and what we see today is a modern replica. But when we go against the double gate on the left side of the southern wall, we find the original stairway from the time of Jesus.  Jesus coming to Jerusalem for visiting the Temple might have walked on these stairs. This is the most probable place in all Jerusalem where we can almost be sure that Jesus actually walked here.

In the 1970s, a team from the Hebrew university, uncovered these original stairway that people used when they exited the temple mount.

After uncovering these stairs, there were several visitors to that site and one of them was Mr. Neil Armstrong, the Astronaut (“One small step for man, One giant leap for mankind”). When Neil heard that on these stairs Jesus might have walked as he exited the temple mount, he went down on his knees, touched the stones and said “I am now more excited than when I have walked on the moon”.

That is for today, and until we meet again in my next video, let’s all live the Jerusalem Experience!