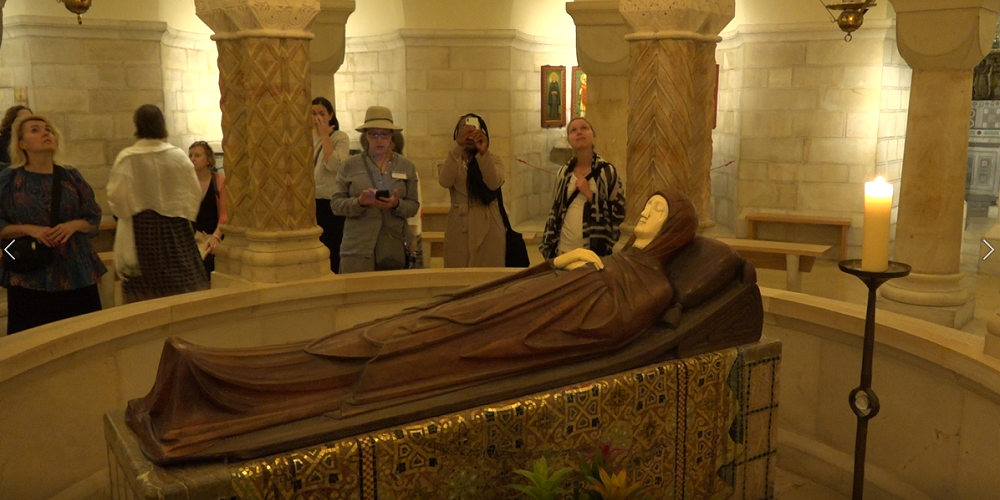 The Church of Dormition Abbey

Today we are visiting the Dormition Abbey in Jerusalem which marks the place where Mary fell in to a deep sleep before her ascension to heaven (The Assumption of Mary to Heaven. The Abbey is located on top of Mount Zion near the Last Supper room and the Tomb of Kind David which increase the holiness of this site. This is why there are so many cemeteries spread around Mount Zion.

The Abby is also known as Hagia-Maria-Sion in reference to the Byzantine church that formerly stood on this spot and was destroyed after the fall of the crusader kingdom.

The Dormition Abbey that we are visiting today was built in 1917 by the Benedictine Order, after the German Kaiser, Wilhelm the second, acquired the land from the ottomans in 1898 during his historic pilgrimage to the holy land. During this pilgrimage he also dedicated the German church of the Redeemer.

Before we get inside the Dormition Abbey, let’s have a look at the church’s roof.  Here to the left is the bell tower crowned with a sign of the cock similar to the Gallicantu Church – according to Mark, Jesus predicted, the night of his arrest that Peter will deny him 3 times before the second crow of the cock.  To the right is the church conical roof made out of tin and resting on a wooden beam construction.

The apse above the main altar features a Byzantine style mosaic of Mary and her Child Jesus holding an open book with the New Testament verse “I am the Light of the World”.  The Greek initials on both sides of Mary and Jesus mean “Mary, mother of God”.

Around the walls of the prayer hall there are 6 side chapels which are decorated by mosaics and are one of the highlights of the church:

An exquisite element in the prayer hall is the mosaic floor. The center of the floor features three interlocking rings representing the Holy Trinity with the word HOLY in Greek inside each ring. The center ring is surrounded by circles symbolizing the stages of the Divine Revelations.

Over there above the entrance to the Church is the organ loft. The Dormition Abbey is known for its excellent acoustics and is a prized venue for concerts – Just listen to this ceremony for the Ascension of Mary.

The Crypt of Mary

Now let’s go down to the crypt on the ground floor which is the highlight of this Abbey and where tradition says is the place where Mary fell into a deep sleep – Dormitio in Latin and Dormition in German.

The center of the crypt features a statue of Mary in her deep sleep – Dormition. The body of the statue is painted cherry wood while the hands and face are craved out of ivory. In the center of the cUpola above the Virgin Mary, Jesus is depicted calling his mother to heaven while he is surrounded by the pantheon of strong biblical female figures such as Eve – the first woman, Ester, Ruth the Moabite, Judith, Yael and Miriam sister of Moses.

Every year on the day of celebration of the Assumption of Mary to heaven, a special ceremony takes place here around Mary.

Over there, on the opposite side of the hall, is the main altar of the crypt with a recess above it presenting enthroned Mary with six of the 12 Apostles on either side of her, while the Holy Spirit hovers above their heads in the form of a dove. Golden tongues of fire descended from heaven upon the Apostles, enabling them to speak in different languages and to spread the message of Christianity throughout the world.  As we have mentioned before, the site of the Dormition Abbey is right next to the upper room where this event of Pentecost actually happened.

Here behind an iron lattice, is a small pieta statue showing Mary holding her son on her knees after he was removed from the Cross.  Over there, is an altar dedicated to John the Baptist with a wooden relief depicting a lamb in its center – a popular symbol of Jesus, based on the words of John the Baptist “behold the Lamb of God”.

That’s it for today, and until we meet again in my next video, Let’s All Live the Jerusalem Experience!