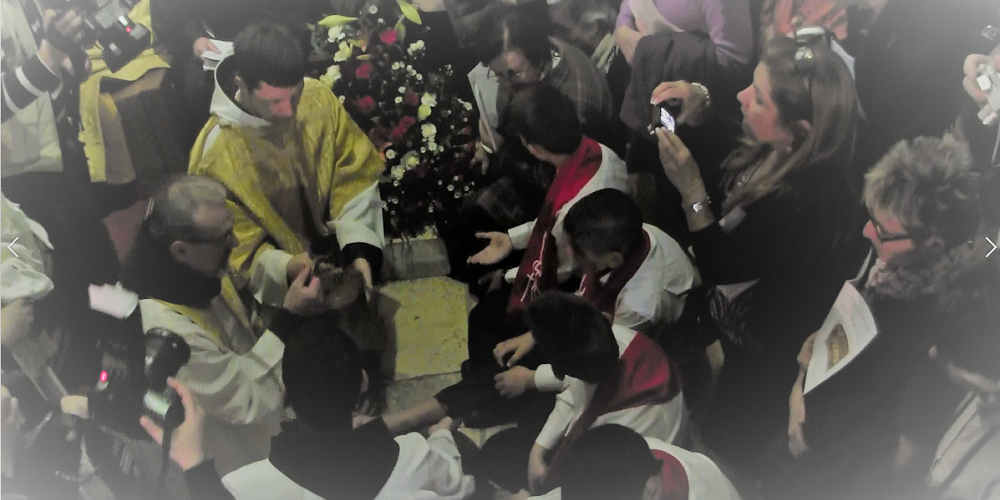 Holy Thursday – Washing of the Feet

Holy Thursday marks the day before Good Friday. On that Thursday, Jesus had his last supper with his disciples at the Upper Room at Mount Zion here in Jerusalem. Prior to this last supper Jesus washed his disciples feet. Later that night, Jesus experienced the Agony in the Garden of Gethsemane, was arrested and the next day Jesus started his Passion along the Via Dolorosa to the site of his crucifixion at Golgotha.

On that last supper, which was the Jewish Seder that marks the beginning of the Passover week,  as recorded in the Gospel of John, Jesus start washing the feet of his Apostles. When they asked him why he does that, and that they need to wash his feet, Jesus explained to his disciples the significance of his action of washing their feet; John verses 13:14-17 (14) “If I then, your Lord and Teacher, have washed your feet, you also ought to wash one another’s feet.” (15) “For I have given you an example, that you should do as I have done to you.” (16) “Most assuredly, I say to you, a servant is not greater than his master; nor is he who is sent greater than he who sent him.” (17) “If you know these things, blessed are you if you do them.”

Holy Thursday is also called Maundy Thursday. The word Maundy is derived through Latin Mandatum and it’s the first word of the phrase “Mandatum novum do vobis ut diligatis invicem sicut dilexi vos” (“A new commandment I give unto you, That ye love one another; as I have loved you”) – this statement by Jesus is recorded by John 13:34 where Jesus explained to his disciples the significant of his action of washing their feet.

Washing of the Feet in Christianity

The Washing of the Feet is a traditional component of the celebration in many Christian churches, including the Armenian, Ethiopian, Eastern Orthodox, Eastern Catholic, Baptist groups, Mennonites, Roman Catholic, Protestant, Pentecostal, Baptists, Anglican, Lutheran and Methodist.

The root of the practice for washing the feet appears to be found in the hospitality customs of ancient civilizations, especially where sandals were the chief footwear. The washing of feet was an element of hospitality normally performed by servants or slaves, and a mark of great respect if performed by the host

In this Video you can participate in a ceremony taking place at the Upper room at Mount Zion here in Jerusalem. the highlight of this ceremony is Fr. Pierbattista Pizzaballa, the current Custos of the Holy land, washing the feet of 12 boys which are part of the Franciscan school here in Jerusalem.

That’s it for today, and until we meet again in my next video. Let’s Live the Jerusalem Experience!

Miracle of The Holy Fire in Jerusalem