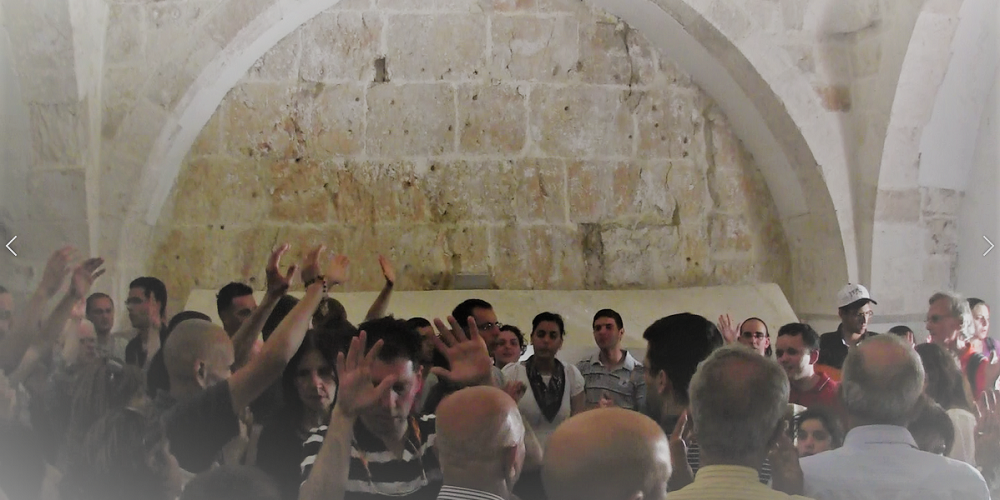 Last Sunday, on the 50th day after Easter, Christians all over the world celebrated Pentecost (Pentecost Sunday) to commemorate the descent of the Holy Spirit upon the disciples of Jesus Christ here at the Cenacle on Mount of Zion in Jerusalem.

Pentecost is one of the major Christians feasts in Jerusalem and I was there to pass you the joy of Pentecost in Jerusalem, so you could feel as if you are actually there. We are starting with a Mass at the Dormition Abbey on Mount Zion and from there we shall continue to a Solemn evening prayer with the Franciscans inside the Cenacle where the first Pentecost took place some 2000 years ago. The Cenacle is located right next to the “Upper Room” which is the room of the Last Supper of Jesus.

Pentecost is one of the prominent feasts in Christian liturgical year commemorating the descent of the Holy Spirit upon the disciples of Jesus Chris. Pentecost which is in Ancient Greek, the “Fiftieth day” is celebrated 7 weeks (50 days) after Easter Sunday and it falls 10 days after Ascension Thursday which marks the Ascension of Jesus to heaven.

Pentecost is also a solemn festival by the Jewish people; so called because celebrated on the fiftieth day (seven weeks) after the second day of the Passover. This day marks the day on which God gave Moses the gift of the law on Mount Sinai, on the fiftieth day after the departure from Egypt.

Among Christians, Pentecost commemorates the descent of the Holy Spirit upon the Twelve apostles and other followers of Jesus in the Cenacle (The “Uper Room”) as they were gathering to celebrate the Jewish Pentecost.

Christ had promised His Apostles that He would sent His Holy Spirit, and, on Pentecost, they were granted the gifts of the Spirit. The Apostles began to preach the Gospel in all of the languages that the Jews who were gathered there spoke (some call it the “Speaking of Tongues”), and about 3,000 people were converted and baptized that day.

That is why Pentecost is often called “the birthday of the Church.” On this day, with the descent of the Holy Spirit, Christ’s mission is completed, and the New Covenant is inaugurated. It’s interesting to note that St. Peter, the first pope, was already the leader and spokesman for the Apostles on Pentecost Sunday (see Acts 2:14ff).

The Cenacle site, or as it often called “The Upper Room”, where Jesus had his last supper together with his followers and later on where the descent of the holy spirit took place, is located on Mount Zion, here in Jerusalem.  In Christian tradition, based on Acts 1:13, the “Upper Room” was the usual place where the Apostles stayed in Jerusalem, thus the Cenacle is considered the site where many other events described in the New Testament took place, such as: