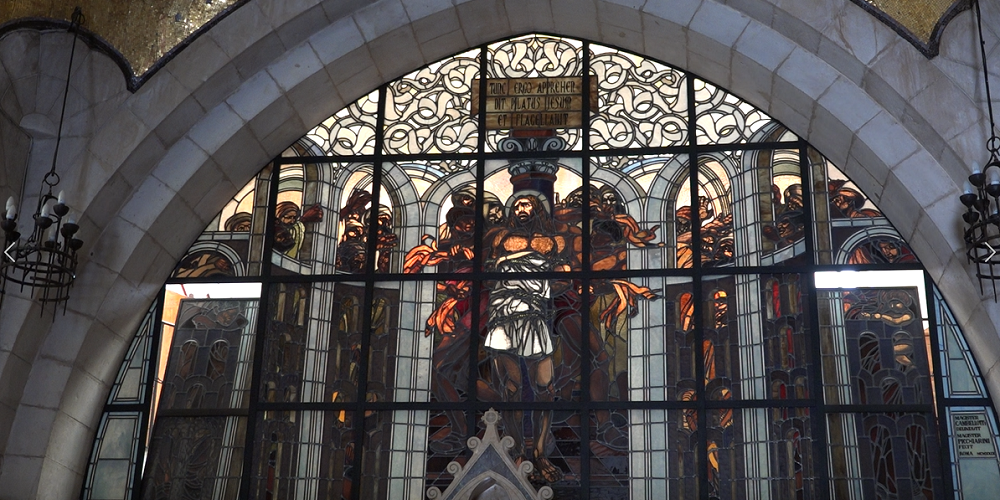 Today we are visiting Station 2 of the Via Dolorosa, which is  the Flagellation Church and the Church of the Condemnation and Imposition of the Cross. 2 churches that tell the story of Jesus, right after he was sentenced to death by crucifixion.

The Gospels describe how the Roman guards dressed Jesus, right after he was sentenced to death, in a purple robe (such as emperors and kings wore), gave him a crown of thorns (instead of a laurel wreath) and mocked him with the salutation “Hail, King of the Jews”.

At that point, Pontius Pilate is said to have called out to the crowd “Ecce Homo”, which is Latin for “Behold the man” – for which I have a special post.

Now Let’s enter the Church Flagellation Via Dolorosa (Flagellation Church Jerusalem) at station 2, which was built during the 12th century to commemorate Jesus’ flagellation

As you can see, thorns serve as the dominant motif for the church’s decoration, both inside and out. Under the central dome, you will see a golden mosaic depicting the Crown of Thorns Pierced by Stars that look like flowers: this is the crown that the Roman soldiers placed on Jesus’ head after they dressed him with a purple robe such as emperors and kings wore and mocked him with the salutation, Hail king of the Jews.

The window above the quire shows the scourging of Jesus by the Roman soldiers and another one on the left shows Pilate washing his hands as a symbol of his blamelessness for Jesus’ fate.

Are you ready to see some of the characters from these stories come to life???…..I’m sure you are, so let’s enter the second church at station 2 that was built to commemorate the condemnation and imposition of the cross on Jesus.

This is a Byzantine church which served as a mosque for many years. The Franciscans restored the chapel to its former splendor in 1903-4.

The main altar shows Pilate washing his hands of any blame for Jesus’ fate while his soldiers impose the Cross on Jesus. Have you notice that these papier-mâché figures looks like they are alive?

Here Jesus with the Cross and on the wall to the right, John the beloved is shown trying to keep Mary from seeing her son carrying the Cross.

Here on the floor there are game boards, presumably used by Roman soldiers who observed the trial, engraved on one of the floor tiles.

Now Register to one of our Membership plans and watch the Video of Station 2 of the Via Dolorosa.