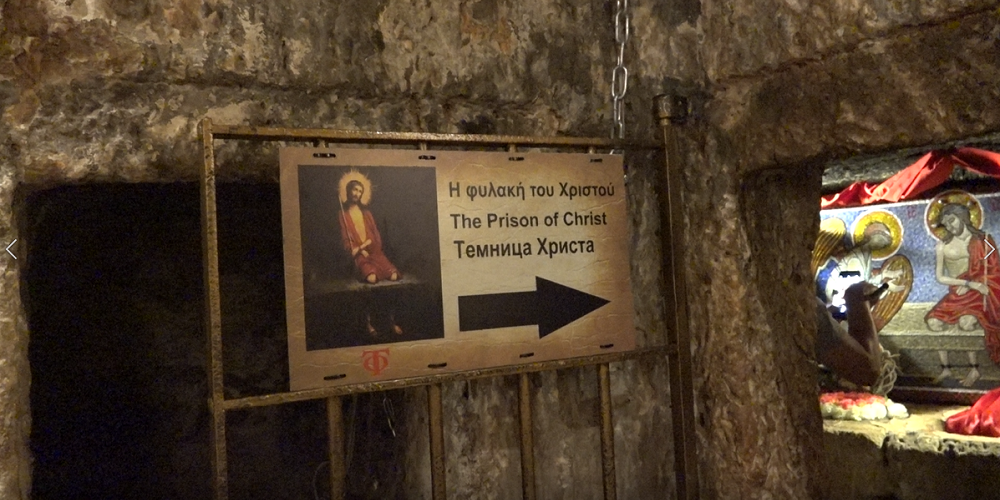 The Prison of Christ by the Greek Orthodox Church

The Latin term praetorium means a Place of Judgment and its derived from Preatorian which means a Judge in ancient Rome.

“Then led they Jesus from Caiaphas unto the hall of judgment”

The Greek monastery that we are visiting today was built during the 18th century and it is located along the beginning of the Via Dolorosa right after the Notre Dame de Zion Convent which contains the “Ecce Homo” arch (“Behold the Man”) and before station number 3 of the Via Dolorosa where Jesus falls for the 1st time.

Now let’s enter and visit the Prison of Christ where Jesus was held prior to his trial.

When we get down the first staircase we enter a small beautiful Orthodox Greek Church.

Before we get to see the Prison of Christ, let’s get down these stairs to see Prison Cells were prisoners were held and tortured by the Roman probably before putting up to trial.

Over there is a carved bench where prisoners were held while their hands tied with iron shackles to the wall behind them. Close your eyes and I am sure you could imagine that! If we look closer we can see the dints where the iron shackles were tied to the wall.

Now let’s see the prison cell, believed to be the place where the 2 thief that were crucified along Jesus and Barabbas were also held.

Now for the highlight of this place, the prison cell where Jesus was held. This cell is located right above, at the same level of the church.

Here is the entrance that leads to an isolated cell where it is believed to be the cell where Jesus was held.  Here on this bench Jesus sat with his legs through these 2 holes in the rock while is ankles are tied in shackles and his hands tied to the walls at these dints, one on each side.

Just imagine Jesus spending the night inside this dark, cold and solitary cell, knowing what he is expecting the morning after. This is an excellent place to meditate on Jesus suffering.

According to the Catholic, the Prison of Christ where Jesus was held prior to his trial is located within the Church of the Holy Sepulchre and you are welcome to watch it.

That is for today, and until we meet again in our next video, let’s all live the Jerusalem Experience!