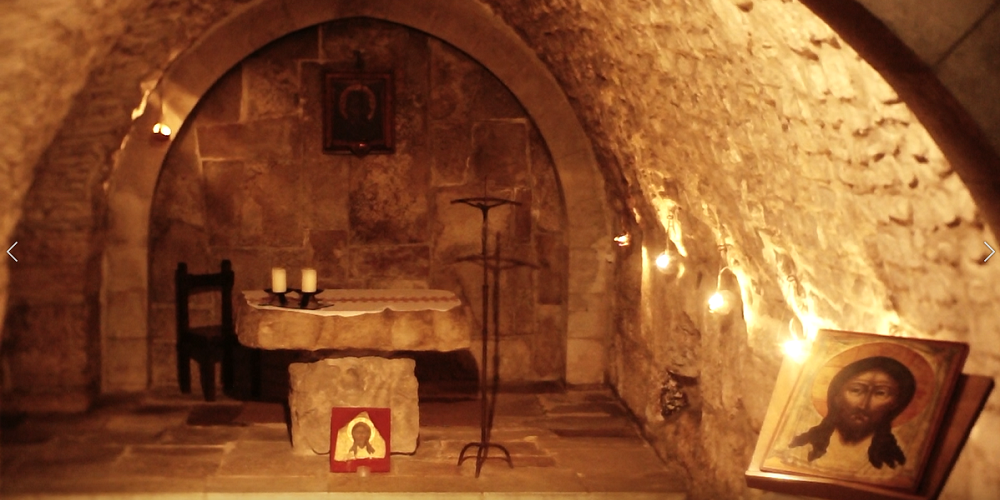 Today we visiting Veronica Station 6 of the Via Dolorosa and see how a girl named Veronica wipes the face of Jesus and captures his image for the first time in history. We will also visit a small workshop where nuns make and paint magnificent icons of Jesus. But first let’s start today’s route by visiting the 6th (Sixth) station Via Dolorosa and Via Dolorosa station 7 Jerusalem.

We’re now climbing along the Via Dolorosa toward the Church of the Holy Sepulchre where Jesus was crucified and approching Veronica Staion 6. Now Imagine, Jesus climbing this path and his face covered in blood from the crown of thorns that is on his head and his eyes closed because of his sweat.

At this point, a young girl named Veronica which Jesus cured in the past, sees Jesus’ suffering, rushes to him and wipes his face with her veil. Only then Jesus is able to open his eyes. When Veronica looks at the cloth she notices that the image of Jesus face is imprinted on it.

Folk etymology has attributed the name’s origin to the words ‘vera’ (Latin for true) and ‘icon’ (Greek for image). Some believe that Veronica’s Veil is now kept by the Pope in Rome while others believe that there are fragments of it in various churches. The church at this station marks the site of Veronica’s home.

At the entrance to the church, there is a small workshop where nuns paint and sell icons.

We are now continuing our climb along the path to Via Dolorosa station 7. According to Christian tradition, this station marks the place where Jesus passed through the Gate of Judgment to the site of the crucifixion, which was outside of the city walls. On his way out, he stumbled over a threshold and fell for the second time. This station features a small Coptic chapel. The Copts, whose roots lie in Egypt, are among the earliest Christians.

From here we shall proceed to Via Dolorosa station 8 where Jesus meets the women of Jerusalem. We will also find out how the name NIKE, of the popular sportswear company, is related to Jesus……

Register to one of our membership plans and learn more and watch this amazing Video of Station 6 & 7 of the Via Dolorosa.

That’s it for now and until we meet again in my next video, let’s all live the Jerusalem experience!!!.